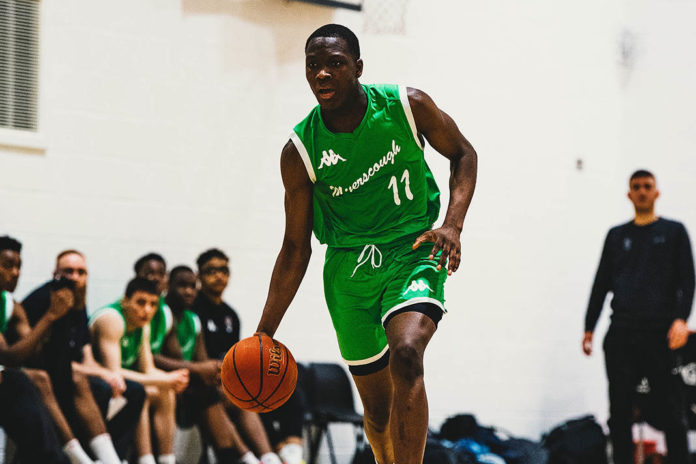 PRESTON – Joseph Bankole took full advantage of being a late addition to the EABL squad on Wednesday.

“I’m still learning the ropes at Myerscough,” said guard Joseph Bankole, who played in just his second game in the competition. “I came in with a point to prove and it meant a lot to back that up.”

Bankole was red hot from range, hitting 6-of-8 3-pointers on his way to a game-high 21 points. He added eight assists.

Myerscough relied on its bench — outscoring James Watt’s 54-10 — to come back from an early eight-point deficit before eventually running away with an 85-46 win to stay unbeaten.

“Birmingham started really well and we just didn’t match their effort,” said Myerscough head coach Neal Hopkins. “We needed guys who were ready to match that level of intensity and I knew there would be hunger off the bench. It’s no secret that we have the luxury of a tremendous amount of depth and it was great to see them not only out compete the opposition but their own teammates.”

Hopkins was forced into timeout during the midst of 9-0 run that would push James Watt ahead 17-9 — the visitor’s largest lead of the game — and subbed out all five of his starters.

Sam Chigbo sparked Myerscough (5-0) with a dunk in transition to end the opening quarter and that momentum carried over. The forward scored 10 straight points to close the gap to 23-22.

“It felt good to get out there and make some big plays,” said Chigbo. “We’ve got a really competitive team and we’re all looking to come in and make an impact.”

Bankole then caught fire knocking down four-straight 3-pointer attempts and Myerscough used a 25-2 run to build a 45-25 halftime lead.

James Watt, which was outscored 44-8 over the second and third quarters, never recovered and succumbed to a 15-0 run from Myerscough after the break.

Chigbo finished with an EABL personal-best 16 points on 8-of-9 shooting to go with nine rebounds.

Myerscough hit 53 percent of its shots, including nine 3-pointers, and outscored James Watt 17-6 on second chance points and 19-13 off turnovers.

Ian Rodriguez had 17 points for James Watt (2-1) while last week’s Player of the Week was held to just nine points and six boards.

“It makes a huge difference when we take care of the ball,” said Hopkins. “When we lock in and value the possession we look like a very good team.”