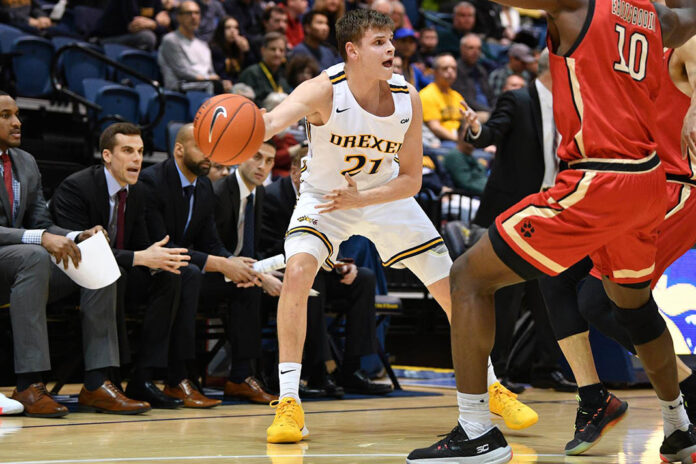 PRESTON, England – Mate Okros highlighted a strong Week 2 for Myerscough Basketball alum in America with a 14-point and 4-rebound performance for Drexel last week. Take a look at the light week ahead, due to COVID-19 protocols forcing teams to cancel.

Okros helped the Dragons sweep a two-game series over Quinnipiac at Bubbleville at Mohegan Sun in Connecticut, before his best performance of the season against Coppin State on Sunday. Drexel improved to 3-1 on the young season.

Amari Williams notched his first points of his collegiate career – a bucket assisted his former Sco teammate Okros – against Quinnipiac and the 6-foot-11 freshman amassed 10 points, four rebounds and three assists in just over 7.7 minutes in the three games.

The duo have a reprieve after playing three games in five days with La Salle visiting the DAK on Sunday.

Edoardo Del Cadia and UNLV, meanwhile, secured their first win of the season after going winless at the Maui Invitational to start the week with losses to No. 14 North Carolina, Alabama and Davidson. But the Runnin’ Rebels rebounded with a 68-58 win over Big 12 foe Kansas State.

The 6-foot-7 junior forward saw a season-high of eight minutes, grabbing a trio of rebounds, which tied him for a season-high that he set against the Tar Heels.

UNLV is off this week with its game against Eastern Washington – originally scheduled for Wednesday – having already been cancelled. Del Cadia will next be in action on Dec. 14 versus Pepperdine.

Zion Tordoff was sidelined with an injury for Marist’s opening weekend sweep of Binghamton. The Red Foxes have a pair of games with Canisius beginning on Friday in Buffalo, N.Y. at 7 p.m. local.

Milly Knowles started both games for Eastern Washington last week, hauling in 11 rebounds across the two losses with Northern Arizona. The Eagles are scheduled to play at Boise State on Thursday, Dec. 10 at 1 p.m. local.

Callan Low played 17 minutes in Newberry’s loss to Division I opponent Western Carolina last Thursday. The forward chipped in six points – both field goals coming via 3-pointers – and two rebounds. He saw 11 minutes of action in the Wolves’ 70-67 win over Carson-Newman.

Low will have to wait until Saturday to next hit the court with Wednesday’s game with Augusta already cancelled.