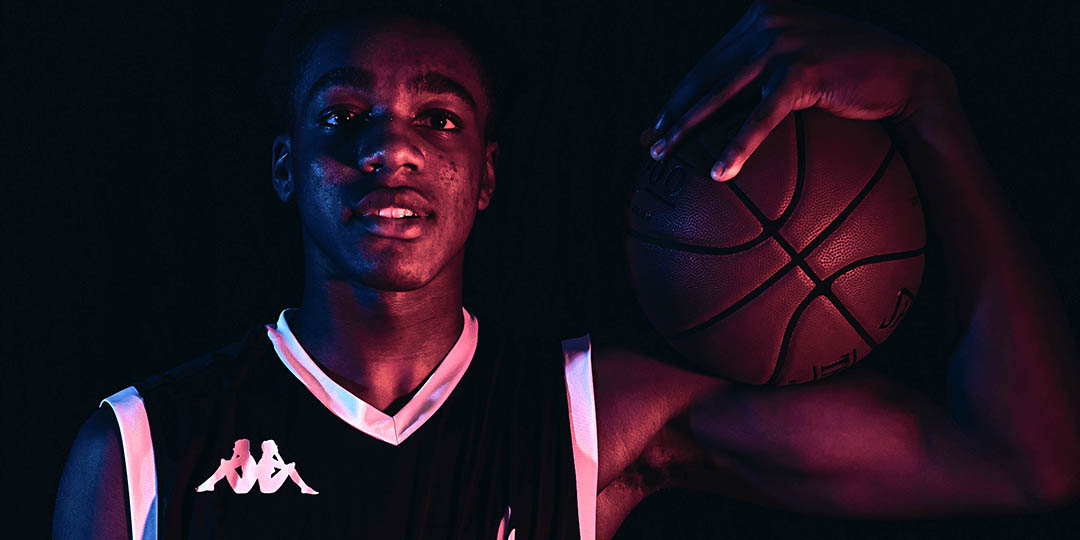 No one asks to be 6-foot-10 and still growing at 17 years old. But Amari Williams has made use of his gift that pushes him towards the skies and his ultimate potential as a basketballer. Amongst the outside noise, he’s there, quiet and reserved, learning to adjust to the challenges and benefits his frame presents.

A LADY DRESSED IN HER WORK ATTIRE taps a half-asleep Amari Williams, whose legs are sprawled outside of his seat and stretched nearly two seats forward towards the cockpit.

“Excuse me sir, could you please move your legs from aisle so we can bring the cart through?” she asks politely.

Begrudgingly he obliges, squeezing his lower extremities back into their confined space, mashed against the seat in front of him. Amari picks up his phone and returns to what he was watching before he nodded off.

For a majority of the flight, patrons and flight attendants have both just stepped over his legs to go about their business — a toddler, meanwhile, paused to look from Amari’s feet all the way up to the soft expression on his face that peers back.

The flight is bound for Riga and it’s already been a long five-hour day cramped inside the Myerscough branded ‘Postman Pat’. But the basketball team of 12 and four staff members is making the effort to get to Ventspils for Stage II of the European Youth Basketball League season.

Each day presents new challenges for Amari, who at 17 years old, is 6-foot-10. In the span of a year and a half he says he’s grown six inches and life looks a lot different from that height.

“He is one of the best passing bigs that we have seen over the years and I am excited to see how he develops over the next 18 months. With complete dedication he really has a chance to make a name for himself.”

Myerscough coach and British Basketball legend Mike Bernard laments not being able to recall what it was like when he matched the same height, but he does understand the difficulties.

“That was a long time ago for me, but it was a shock to my system going from one height to the next,” he said. “It‘s the simple things that change that are hard to understand if you’re not that height.”

“You’re never able to find clothes that fit in a regular shop. It’s a hassle learning how to drive — Most of the driving schools don’t use big cars and then when he passes his test, it’s finding a car that fits him, is comfortable and safe to drive. Shoes are also a struggle once you get past a size 15 as there are none out there that you’re going to find.” 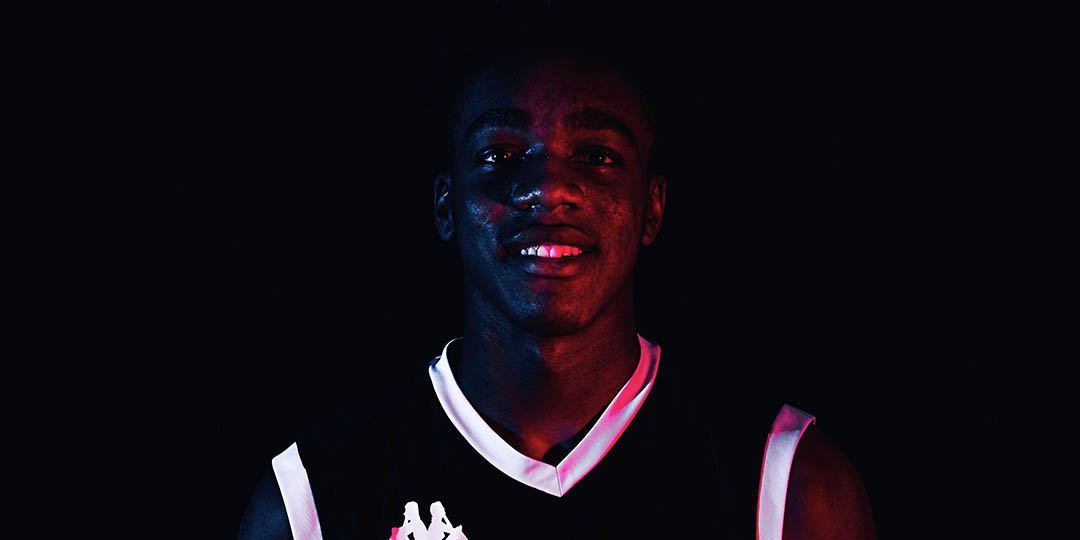 AMARI’S DEMEANOR IS RELAXED. He‘s slumped in a chair in the canteen at the Olimpiskais Centrs in Ventspils, Latvia.

Teammate Ade Adeniran moves a GoPro closer to Amari — “Yo, why have you moved closer?” he says with a smirk.

“After today’s game how are you feeling?” asks Ade. Amari’s response isn’t audible. “Sorry can you say that again?”

“Tired,” announces Amari. Over his shoulder Bradley Kaboza is listening in.

“How do you feel the team has done in this competition so far?” Ade says for a follow-up.

“We’ve done all right—” but before he can finish, Ade interjects.

“And please put your phone down.”

Amari slowly lowers his phone and says, “Oh, you don’t have to be like that!” By the end of the sentence the two are laughing. “Ask Corey [Samuels], fam [sic].”

There’s a massive difference between when Amari arrived at Myerscough in September to now. He arrived with his friend Ben Nailer, and while the two are still close friends, they have both found a place.

“It’s important that he’s here too,” said Amari. “Especially when you start off at a new place and don’t know anyone, he was someone there that could help.”

“He’s really come out of his shell now,” said Mike, who sees Amari on a regular basis for individual sessions with the bigs. “He’s interacting with everybody outside of practice, playing video games and having a lot of banter with a lot of the guys. I think that the guys who are quiet, they come in and find a culture that they can run into and just have fun with. Amari has definitely found that group and he’s finding his voice. Having that mixed culture [at Myerscough] is such a benefit for our players.” 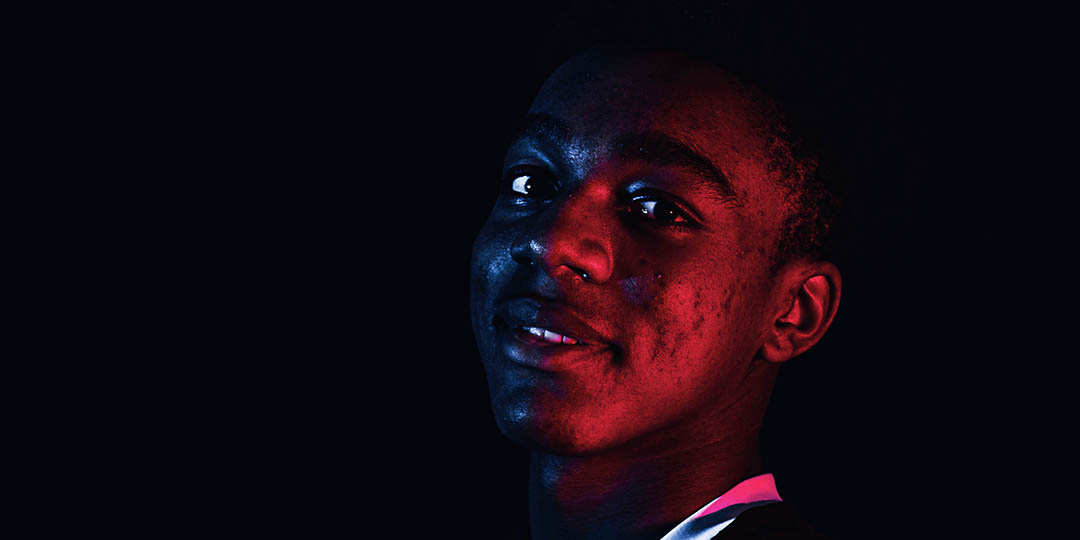 AMARI’S STRIDES ARE LONG AND DIRECT. Despite having the height of a forward, he’s confident pushing the ball up the floor like a point guard. On numerous ocassions this season, he’s gone end to end, culminating in a dunk.

And on his visit to Myerscough last spring, he briefly demonstrated the potential he can reach. In the span of just a few seconds during a scrimmage, he made a thunderous two-handed put-back dunk before pinning an opponent‘s shot against the glass at the other end — the gym went mad.

Those plays were really just the start.

Throughout the season he’s showcased his passing ability, both in transition and the half-court. He’s picked out players with no-look dishes and with zipped dimes that lead to easy baskets for his teammates and admiration from the crowd.

“It’s good to be able to have both skill sets, those of a guard and an inside player,” said Amari. “It’s really helpful, especially when certain bigs are marking me and can’t handle that type of player.

“From being small, obviously I was a guard, but I’ve been having to learn to play in the post and crash the offensive glass more than I normally had.”

Universities in America have already begun to take note of Amari, who has had success in the EYBL, NBL Division 2 and EABL in England. He also represented Great Britain at the Under-16 European Championships in Sarajevo, where he averaged 6.5 rebounds and 2.3 assists to go with 5.6 points.

“Amari — as with others — have everything to gain from the sport if they approach it with the right attitude,” said Myerscough head coach Neal Hopkins. “He certainly has a unique skill set. I think his feel for the game is already at a good level and he has traits that translate to a bigger stage.

“He is one of the best passing bigs that we have seen over the years and I am excited to see how he develops over the next 18 months. With complete dedication he really has a chance to make a name for himself.”

His first love was football, which he played until he was 10. His older brother, Hakim, however, inspired him to take up basketball. At 13, Amari was 5-foot-10 and already bringing attention to himself. He was learning quickly how to play under that pressure.

“There‘s pressure, but I allow myself to go out and enjoy the sport,” he said. “I just want to improve and I‘m see myself becoming more confident each week.”