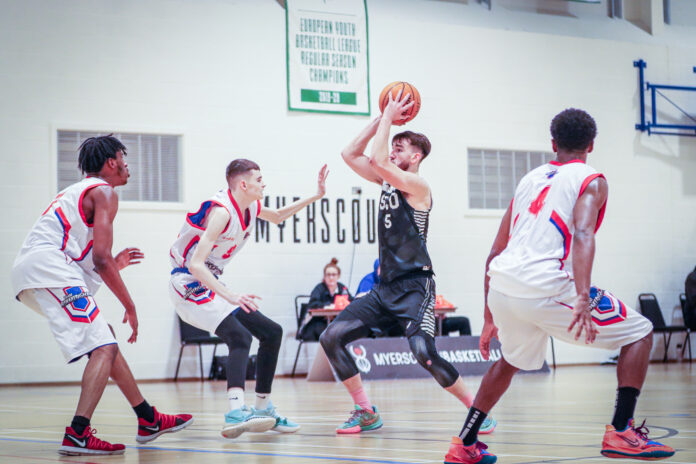 A win on the road was followed up by a home win and the sweep over Team Birmingham, as Myerscough moved to 11 and 2 in the EABL this week.

Birmingham – Bryan Akanmu scored from an offensive rebound to set up over-time as Myerscough struggled to find any rhythm on the road in Birmingham on Tuesday. It was Myerscough who pulled away in OT to take a valuable 66 – 60 victory.

Team Birmingham started well to lead the first quarter by 5 points (20-15) It was much of the same in the second period as Myerscough struggled to gain a foot hold in what is always a difficult fixture. Team Birmingham were able to stretch their lead to 7 at the half.

A third quarter fight back from Myerscough saw the lead narrow to 1 point (45-44) heading into the fourth. It was a tense final period as Myerscough still couldn’t gain any momentum. Team Birmingham held a 2 point led with 5 seconds to play but Myerscough were able to convert out of a timeout (57-57) to set up OT.

With a shortened rotation Team Birmingham ran out of gas as Myerscough outscored the home side 9 – 3 in the extra period to escape with a 66 – 60 win.

Bryan Akanmu collected a game high 24 points in the win, as Euan Birch and Wesley Iwediebo collected 13 and 11 points respectively.

Preston – A quick turn-around saw Myerscough and Team Birmingham lock horns again on Wednesday. This time a very different performance from Myerscough saw the home side cruise to a 76 – 47 victory.

Pedro Ellery ignited Myerscough following a slow start, ‘Sco would lead by 20 points for the majority of the game and were afforded the chance to give valuable minutes across the squad.

Myerscough, with 2nd place in the North locked up, will take on Charnwood College next week before playoff action commences.