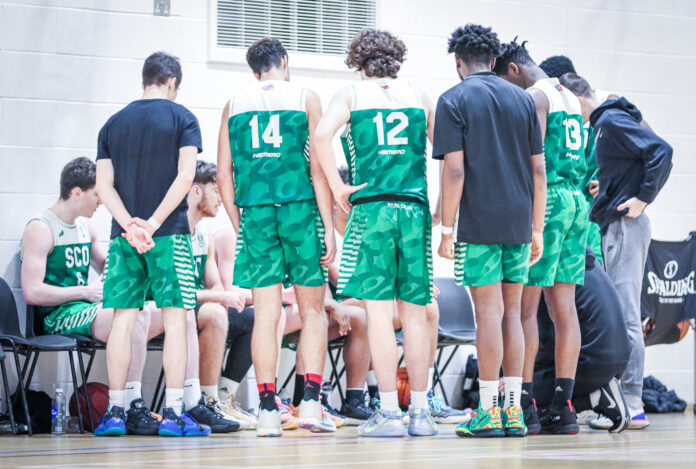 BRISTOL – 36 points from the bench, including double digits scoring from Juelz Robinson (11) and Will Kemp (10), proved to be the difference as Myerscough overcame Bristol Flyers 83 – 64 on Saturday afternoon.

Myerscough trailed after the first period 24 – 18 but fought back to take a 2 point lead into the half time break. “The second quarter was much better with guys coming off the bench and giving great energy which allowed us to half a lead going into the third” Said Kemp, who added 5 assists and 3 steals to his 10 points.

Myerscough took control of the second half and despite the constant threat of Bristol, who were led by 19 points from Marvin Dinnall, were able to find a defensive foothold in the game.

A 21 – 6 fourth quarter for Myerscough capped a fantastic defensive effort. “All in all it was a great team win as everybody on the team showed great energy throughout. Personally, I thought I brought great energy off the bench with my intensity on the defensive end picking up steals, deflections, this gave me the confidence to go hard on the offensive end to hit shots, attack down hill at the rim and find my open teammates”, Kemp Continued.

Ridley Shema led Myerscough with 17 points, whilst Bryan Akanmu had 15 points to go with 14 rebounds.

“As a whole, we played a solid game; dominating from start to finish. When I knew I was feeling good from the three point line my teammates knew how to work with it and get me the ball in the 4th quarter. I think this game has given us some positive energy to get us motivated for our next games coming up”, said Johnstone.

PRESTON, Under 18 Conference – Riding high and in good form, the under 18 conference team eased past Manchester Swarm with a 72 – 41 victory.

Leading by 24 at the half, Coach Mike Bernard was able to see valuable minutes from all of his players.

Division 3 Men – It was a tough day at the office for the Division 3 side against run away league leaders St Helens. After a promising first half, which saw St Helens hold a 13 points lead (29 – 42) Myerscough fell away, losing out in the second half 54 – 15, eventually succumbing to a 44 – 96 loss.

Ben Prince provided a bright spot for Myerscough, with 17 points.