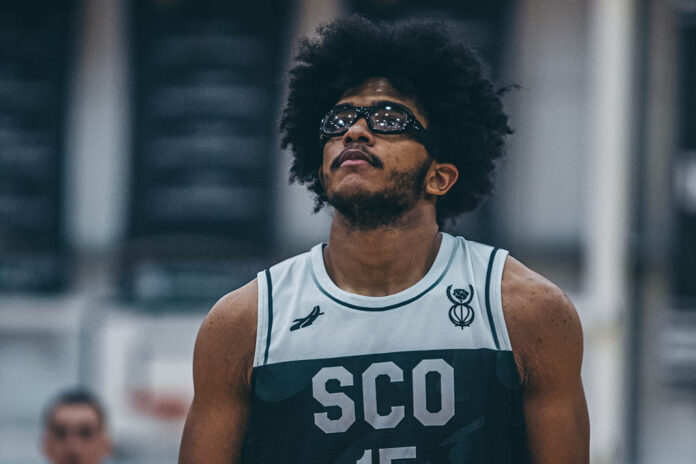 “I feel like this is something I’ve worked really hard to achieve,” said Agu. The Class of 2021 product had interest from NCAA Division II schools Sioux Falls and Northeastern State. “I just want to thank all my coaches — from Coach Frank and Coach Damion at Haringey to all the coaching staff at Myerscough — because I know they have been pushing me to prepare for the next level and I want to prove their faith in me as a player.”

Agu played two years at Myerscough where he was part of the 2019-20 European Youth Basketball League regular season championship, which was the first season-long title won by a British basketball team at any level. He also helped Sco claim the Elite Academy Basketball League North Division and a share of the playoff title.

The 6-foot-6 forward and London native featured in his lone season in the EYBL, averaging 9.7 points and 6.7 rebounds in 18 minutes of action. He reached double-figures scoring eight times and had a season-best 15 points against Sandvika at Stage II.

Agu was a key component of Myerscough’s NBL Division II team that finished as runners-up in 2019-20. He started 15 of 17 games and averaged 11.1 points on 62.2 percent shooting to go with 7.3 rebounds. He hauled in 39 offensive rebounds, made 32 assists and 14 steals. Myerscough had a 14-3 league record and 17-4 mark overall in the men’s league, where it made a historic run to the National Cup semifinals.

“My time at Myerscough has allowed me to make smarter decisions on the court and play more composed,” said Agu. “The thing I’m most proud of is how much I’ve developed as a player and as a person. The past two years I’ve learnt a lot from different people and I’ve managed to implement that into my game.”

Agu spent the second half of the 2020-21 season with the British Basketball League’s Manchester Giants. He featured five times as an 18-year-old averaging just under two minutes.

“Playing for the Giants was a big privilege for me,” he said. “Being able to play with players that have been through the process that I am aiming to go through was a big step for me because a couple of them took me under their wing and guided me so that I can prepare for my next step.”

Midland College finished the 2020-21 season with a 1-14 record overall, including a winless mark in conference play, but the Chaps had a young roster that had 11 freshmen and just one sophomore. Midland currently competes in the Western Junior College Athletic Conference (NJCAA Region V).

Midland is coached by Patrick Rafferty, who is in his second stint as head coach. Rafferty had a 97-51 record during his first tenure back in 1994-99 before returning to the programme in 2017. He is a former head coach of Central Wyoming College, Grayson Community College and Casper College, with stops as an assistant at the University of Louisville (NCAA Division I) and the Long Island Nets (NBA D League).

Agu joins Great Osobor (Montana State) as the two current Myerscough players to commit to programmes in the United States for the 2021-22 season.