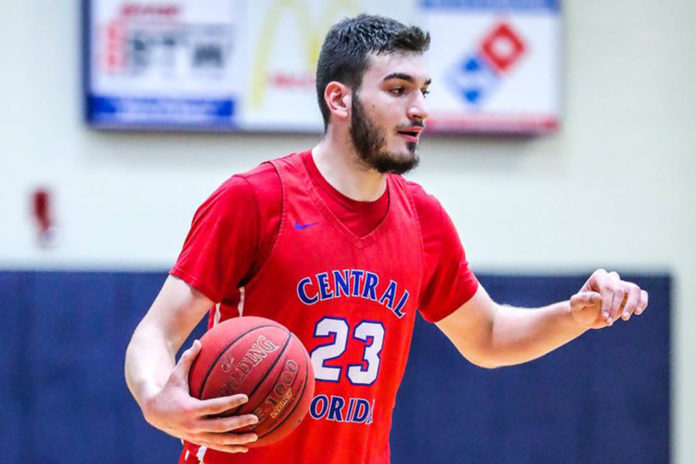 Myerscough alumni Edoardo Del Cadia has had a breakout sophomore year at the College of Central Florida. The 6-foot-8 forward and native of Italy set a career-high of 29 points against Eastern Florida College State on Jan. 8, recording his ninth double-double this season in the process — at one stage in December, he a stretch of five-straight.

Del Cadia, who was the No. 6th ranked player in the DENG Camp Class of 2018, is averaging nearly a double-double through 17 games of the 2019-20 season. His 14.0 points and 9.6 rebounds currently ranks second and first on the Patriots, respectively.

MY HUNGER IS A BIG PART OF MY SUCCESS. Not many people get the path that I have and you have to use your opportunities. The coaches [at Myerscough, Cloud County CC and College of Central Florida] really believe in a player’s success and they’ll push you through practices, lifting sessions and in the classroom.

MY TEAMMATES KNOW WHAT I AM CAPABLE OF. They see me on a daily basis in practice and they put me in situations to do what I bring to the team. Playing with that confidence from them can change your whole game. That, my love of competition and the strength of this league has really been getting the best out of me.

MYERSCOUGH WAS A BLESSING FOR ME AND MY FAMILY. I will never be thankful enough to the coaches for what they did for me — It has helped me become the player and person that I am today.

THE OPPORTUNITIES MYERSCOUGH GIVES ITS PLAYERS PREPARED ME FOR THE CHALLENGES I’VE FACED IN AMERICA. I played against a lot of different players, talents that are now playing in the U.S during my two years at Myerscough. That prepared me to be ready for the next level. Sco has a great coaching staff that take care of their players and push them to their limits — that’s what is going to make you a tough player capable of achieving your goals.

MYERSCOUGH RECOGNISED MY POTENTIAL AND THAT’S CARRIED OVER. I’ve always shown that I’m willing to work hard to reach great goals such as a championship. My coaches believe in what I do and that gives any player the confidence to go out there and perform at a high level. It’s the same for me, just with a different type of confidence.

WHEN I ARRIVED IN ENGLAND, I COULDN’T SPEAK ENGLISH AT ALL. That’s the honest truth and my teammates knew it. Being able to grow with the language, I’ve learned a lot over the past four years and I feel I can say that I speak English fluently now. Since it was my goal to study and play in the United States, I had to adapt myself to their system and I think I’ve done great.

I’VE GROWN SO MUCH DURING MY TWO YEARS IN AMERICA THUS FAR. I will never forget the first time I arrived to play at Cloud County. It was looking like at a dream. I couldn’t stop believing where I was at — I thought it was amazing. I’ve met great people during these two years that have continued to push me through the process. Both of my JUCO teams have had amazing players that have chances to move on to big things.

IT’S GREAT TO BE MAKING THE IMPACT THAT I HAVE BEEN. It means a lot, especially in my second year of junior college. I knew these kinds of performances were going to come, I just didn’t know when. But the coaches and my teammates put me in positions to be successful and I’ve been taking advantage of them.

IF YOU WANT SOMETHING, GO GET IT. My goal has always been to play college at the Division I level and that’s not changed. I’m working hard to get there.