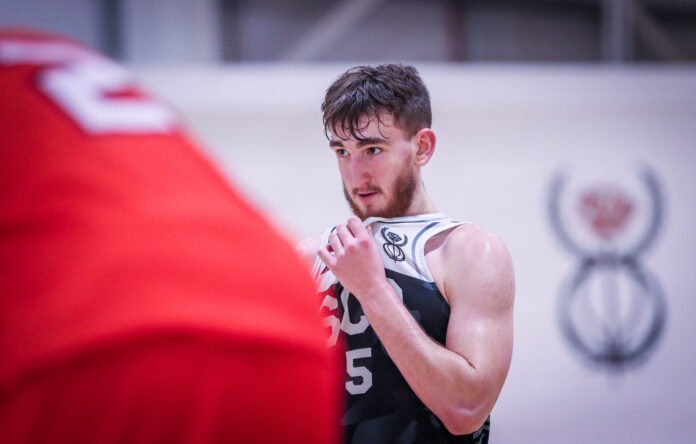 PRESTON, England — Pedro Ellery had a season high 31 points, including 8 three pointers, but it wasn’t enough as Derbyshire Arrows came up with a 1 point victory following a last minute winner.

In what was an evenly fought contest, it was a Callum McKenzie three with 16 second left for the Arrows that proved decisive, Pedro Ellery saw a three roll out on the buzzer as Myerscough moved to 5 and 5 in NBL Division 2 North.

No other Myerscough player managed double digits in scoring in a game that had 11 lead changes. Myerscough held the advantage at the half (37 – 30) but the Arrows, who were led by the experience of Xavier McIntosh and Joseph Baugh (18 points each) didn’t allow the home side to get away.

A back and forth final period saw Myerscough take a two point lead with 30 seconds left only to suffer heartbreak through the final possessions.

“This was a game both teams deserved to win”, said Myerscough Head Coach Neal Hopkins, “It is a tough loss to take, but credit to the Arrows for getting the job done, we left a lot of points out there today and we were made to pay. Pedro Ellery was outstanding, he has really grown over the last few weeks, it’s a shame we couldn’t cap his performance off with a win”.

Myerscough will have a rare weekend off, before heading to Bristol to take on the Flyers on the 29th of January.

LIVERPOOL, England — Ben Prince led Myerscough to a 72 – 61 win away to Liverpool in NBL Division 3. Prince kept Myerscough’s play-off hopes alive in what was his performance of the season.

“It was a good team win away from home. We really dug in on defence in the 2nd half and were able to see out the game. We’ll continue to work hard in practice and look to build on this performance for the next game”. said Ben Prince.

A 26 – 5 third quarter from Myerscough highlighted a great team effort. “My team came out and played aggressive on defence and we moved the ball well on the offensive end”, said Razak, “The team worked so hard this week in practice coming off a hard loss last weekend, we wanted to bounce back with a great team performance, I am very proud of the effort the team gave today.

UNDER 18 PREMIER — Myerscough used a dominant first half to move past Liverpool 98 – 72, it was a much improved performance from Coach Troy Culley’s side who were led by 17 points from Calum Johnstone.