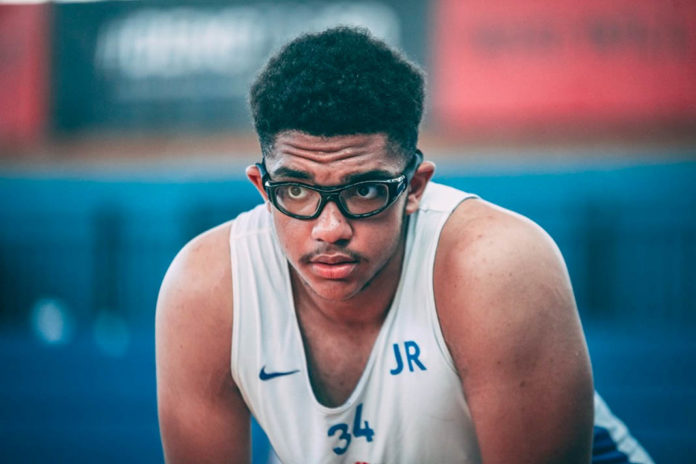 Franklin Agu is one of the most promising young British prospects, where he is currently ranked fifth in the DENG Camp Top 20. The 6-foot-6 wing arrived in the North West seeking opportunities provided by Myerscough Basketball Academy that will help him and his game to take the next step.

Agu has already experience one stage in the European Youth Basketball League, where he ranked first on Myerscough in rebounding averaging 7.4 in five games. He started every game in Riga chipping in 6.2 points on 47.6 percent shooting

GIVE EVERYTHING 100 PERCENT, EVERY TIME. When I came to Myerscough I quickly learned that if you don’t bring it 100% to training everyday that you can get replaced just like that — There’s a lot of talented players here so anybody willing to give that extra effort can take your spot.

I WANT TO GET BETTER AS A PLAYER AND AS A TEAMMATE. I’ve already learned so many new things from the players and coaches and that’s helping me become stronger as an indvidiual and a teammate.

GOING AGAINST MEN’S TEAM IS A NEW EXPERIENCE. That was the biggest surprise, was playing against a men’s team as it was something I had never experienced before.

THERE’S NO TIME TO FEEL HOMESICK. The company of your teammates and friends takes your mind off the fact that you’re away from home and your family. Basketball is the reason why we are at Myerscough and we’re here to improve and become independent.

WHAT MOTIVATES ME? I want to make mum proud of what I’ve done every step along the journey that’s taken me where I am today.

MYERSCOUGH GIVES PLAYERS OPPORTUNITIES. I had a lot of friends that were already at the Academy and I had seen the way they all have all improved. I saw the different opportunities they were getting, which is something I wanted to be part of.

THE EUROPEAN YOUTH BASKETBALL LEAGUE HAS PROVIDED ITS OWN CHALLENGES. A lot of the teams are quite tall, so I’ve had to adjust to that. I know I need to take advantage of my skill set.

SIGHTS AND SCOOTERS. The best experience off the court in Riga was when everyone rode around the city on electric scooters. It took time to adjust to being in a different place, but that’s one of the opportunities Myerscough gives its players.

MYERSCOUGH IS A FRESH START. Everything that’s happened in the past isn’t mentioned — accomplishments or anything — we’ve all come to Myerscough with a point to prove.

MY EARLIEST BASKETBALL MEMORY? I won a Most Valuable Player award and it was what sparked the start of my basketball career and has since motivated me to everything I can to be a better player.

I’M EASILY RECOGNISED BY MY EYEWEAR ON COURT. I’m proud to wear them each and every game — I feel like they help me player better.