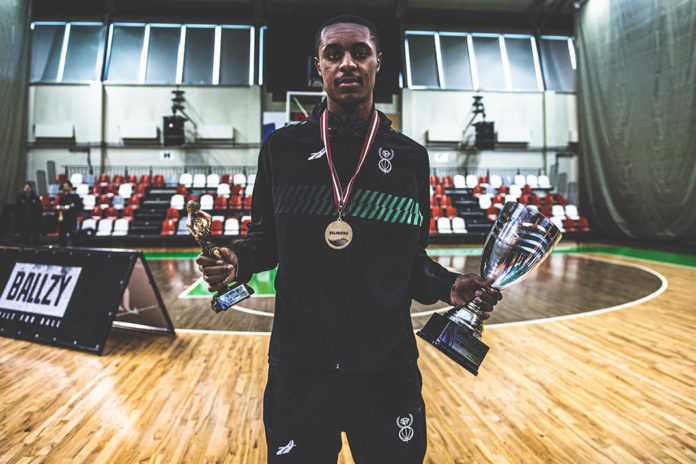 Kaboza led Myerscough in scoring at 17.0 points per game on 56.6 percent shooting. He reached double-figures in three out of five games and matched the league’s highest individual performance with 31 points against BS DSN.

“From the start of the season I put myself in a place where I wanted to be the one to step up in these moments,” said Kaboza. “It’s been great to have the belief of my teammates — when I have that it makes me more confident to perform.”

Kaboza trailed just Klaipeda VKKM’s Kornelijus Zikas as the leading scorer at Stage III in Valmiera and ranked tied for fifth league-wide. The 6-foot-2 guard poured in 23 points against Valmiera BSS to help Myerscough come from behind in Game 3.

Over the last two stages, Kaboza has totalled 130 points, 43 rebounds, 21 assists and 13 steals in 10 games played in just an average of 20 minutes. He has reached double figures six times in that stretch.

“This team is special,” he added. “We’re not phased by anything — if we’re down, up or in a close game — that goes from the coach down to the last man on the bench and that’s something you don’t find in every team. That makes us effective and I’m lucky to be playing with these guys.”

Kaboza became the first Myerscough player to be named an EYBL Stage MVP when he collected the award in Riga in December.

Myerscough, meanwhile, has reached the EYBL SuperFinal for a second-straight year following a 14-1 record that locked up the Academy’s first regular season championship in the competition.