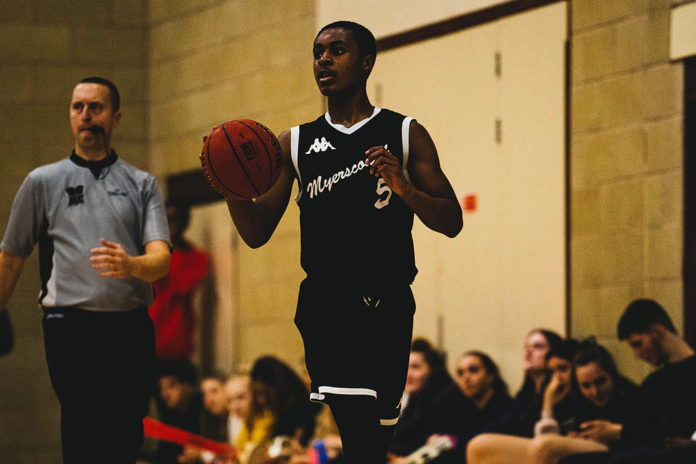 Kaboza, who scored 21 points before halftime, hit five of Myerscough’s 11 total 3-pointers and went 11-of-17 from the field. Sco shot 52.6 percent and knocked down 44 percent of its attempts from deep.

Myerscough used a 12-0 run to overturn a 32-27 deficit. McGlasson hit from deep to tie the game at 32-all with 6:30 left in the half before Williams broke the deadlock and a Kaboza layup forced a Charnwood timeout.

A 54-45 halftime advantage for Myerscough grew to as many as 19 points and Charnwood got no closer than 12. Great Osobor curbed any late comeback attempt with a 3-point play with 1:04 remaining that gave Sco a 101-88 lead.

Charnwood scored 26 points off 24 turnovers — tied for second most this season — but Myerscough cancelled out that advantage by holding a 63-22 margin on the glass, including 25-7 at the offensive end, which it converted into 26 second-chance points.

Blaize Sagna had a team-high 22 points for Charnwood, which hit 14 3-pointers in the loss. Sagan and Josh Lloyd (18 points) hit four each. Greg Durand added 17 points and Victor Ndoukou had 16.