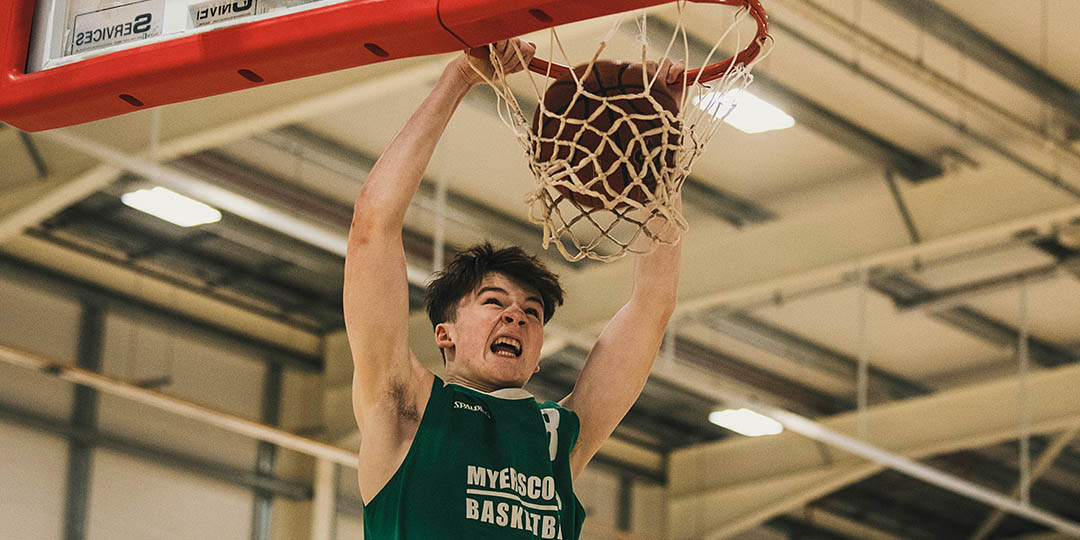 I started playing basketball when I was seven or eight at Play and Pay sessions in Stirling, Scotland. My parents encouraged me to pick it up, as my older brother had play rugby and American football, but I loved it from the start — I loved learning about all the skills and one of my earliest memories was dunking on an eight-foot rim.

We used to go to a game day every Friday where all of Stirling would come and play and that’s where I was asked if I wanted to join my first club in the under-12 age group.

From there I’ve been a Scottish Finals MVP and have represented my country four times at the Under-16 and Under-15 level, and I’m only just getting started.

DEFENCE WINS GAMES. The biggest adjustment I’ve had to make since coming to Myerscough is the way I play defence. Throughout the time I’ve been here, my defence has definitely come on because of the sheer importance of being able to play at that end of the floor and when it comes down to it, defence can win you games.

MAKING A MISTAKE ISN’T THE END OF THE WORLD. The biggest development I’ve seen in my game would be to my mindset. I realised that making mistakes isn’t the end of the world and there’s no point in getting upset or annoyed with myself. I’ve found going through video with the coaching staff or speaking with who can do something better than I can for advice to be helpful. The coaches pick out good points for improvement and that helps build a strong connection with them, too.

MY FIRST DUNK SHOULD’VE BEEN AN AND ONE. I was 15 and it came against Dunfermline. I figured why not and just went up for it and managed to dunk it and then I fell over and flexed. I was pretty hyped and we went on to win the game.

MYERSCOUGH IS A BROTHERHOOD. Everyone lives together in the same block and that’s made Myerscough have such a tight bond. There’s always someone around and I think that’s allowed us to create a good team chemistry where everyone looks out for each other — on and off court. It’s also good having my friends from my old team because it means I’m not here by myself.

IT’S A REALLY COMPETITIVE ENVIRONMENT. Lewis’ [McGlasson] dad Les had recommended that I check out Myerscough because he had said he was really enjoying it and that it was helping his game. There’s also a competitive environment and I saw that on my visit.

ACHIEVING MY GOALS IS AN OPPORTUNITY I DON’T WANT TO MISS. I think the reality check made me realise how I need to put in extra work. … Some of the people I play with and against have scholarship offers or are committed to American universities and the amount of hours they had to put in to achieve this it probably uncountable. I’m really motivated to get somewhere with basketball so I don’t want to miss a great opportunity and Myerscough is providing me with the tools to reach those.

MY MUM IS A BIG SUPPORT SYSTEM FOR ME. Having my mum come down is a real morale boost. Knowing she cares enough to drive nearly three hours to come and watch her son play, whether it be four minutes or forty is great and I’m glad have her and my step-dad looking out for me while I’m away from home.

I’VE BECOME A LOT MORE INDEPENDENT. It was difficult at first being away from home. Before coming to Myerscough I was quite reliant on my family at home for lifts, making dinner, encouraging me to study etc. … I think now I have become a lot more independent. I have to look after myself by sleeping and eating well so that I can train at a high level. I also want to get good grades in my college work so that motivates me to complete it to a high standard.

MY FAVOURITE BASKETBALLING MOMENT SINCE COMING TO MYERSCOUGH HAPPENED IN PORTUGAL. I scored 26 points against Sampanese Basketball Club when we were on pre-season and that gave me a lot of confidence heading into the season that I could compete at a high level.

THE COACHES MAKE IT CLEAR WHAT’S EXPECTED. I found it difficult moving into a new setting when I was coming from a club where I knew what was expected of me. I wasn’t really sure at first, but over the time I’ve been here the coaches have made it clear to me what is expected in training and games.

I’M MOTIVATED BY THE GOALS I’VE SET FOR MYSELF. The motivation to succeed helps me get through adversity I may face on court or in the classroom. I don’t want to fail and I’ll never give up until I achieve my goals.

I’M BACK TO BEING A SMALL FISH. Coming from a league were I was the so called “big fish”, I initially found it tough to be back at the bottom and having to re-establish myself again. But this is a really good reality check and I think I needed it because I now play against players that are more skilled than me, which really helps me improve my game.