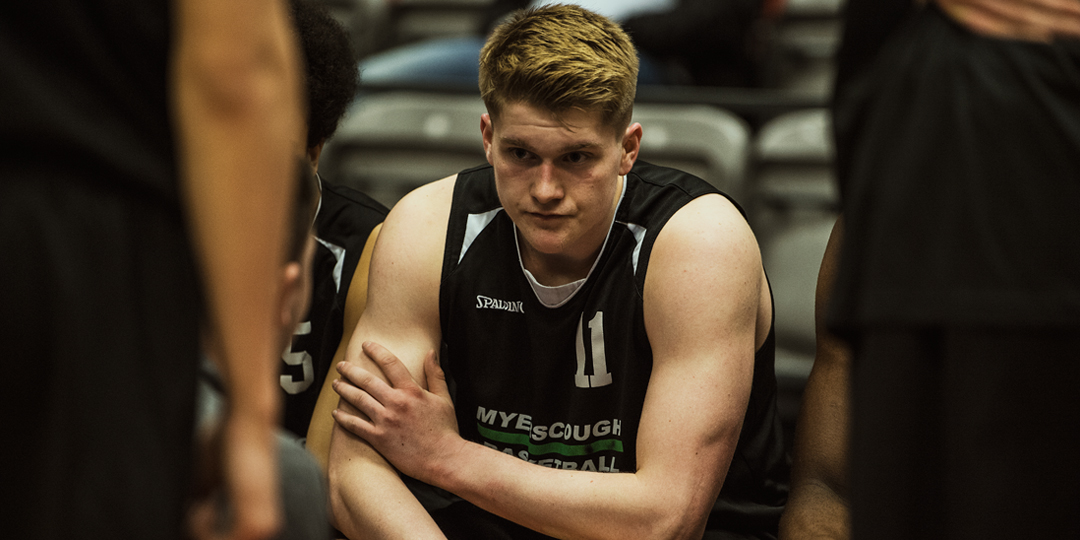 The pair combined to shoot 12-of-22 from the field, but Myerscough (2-1 EYBL) hit just 30 percent as a team. Low accounted for four of Sco’s five 3-pointers in the loss.

Myerscough jumped out to an early lead, which grew to eight following a pair of free throws from Okros, but Kalev’s rallied with a 13-1 run sparked by back-to-back 3-pointers to take 25-21 advantage.

Sco would respond using an 11-2 burst that spanned either side of halftime to go ahead 32-27, before Kalev put together an 11-0 run over 3 minutes to regain the lead. Myerscough cut a six-point deficit to one, but Kiur Thomas Vehmanen scored 10 points down the stretch to close it out.

POST GAME QUOTES
MYERSCOUGH COACH NEAL HOPKINS
On a quick turnaround …
“This is the reality of tournament-esque play — You have to be really prepared for the first game on the second day as it’s so critical. Yesterday was great to punch that first win, but the reality struck in today and we went back to some old habits. But you have to give credit to Kalev. They made some big plays down the stretch, some dagger plays, that took the steam out of us. We set a tone yesterday that we just didn’t match and that’s immensely frustrating.”

On getting more out of the bigs …
“Amari had the most mature performance out of our bigs and I think they older guys have to go to look at that and raise their standards. We can’t take any plays off here and we gave up too many second chance points, too many second chance efforts. Everything we did yesterday that requires effort, we didn’t get today.”

On Callan Low’s big performance …
“Callan is Mr. Consistent. He treats his game professionally and he wants to get everything out of it, which is something some of these guys can learn from. He never feels entitled, he works hard and gets his rewards. He’s a tough competitor and that’s why he starts for us.”

On performing well in a loss …
“It’s a downer that it came in a loss. We wanted to keep the win streak going, but no matter how many points you score on a day the team lost. We’re going to look to improve and get the next win.”

On needing to ride the momentum …
“It’s important. Coach is always talking about how tournament play is a complete roller coaster — You can go from a high to like last night where we were winning to now of a bit of low after a loss.”