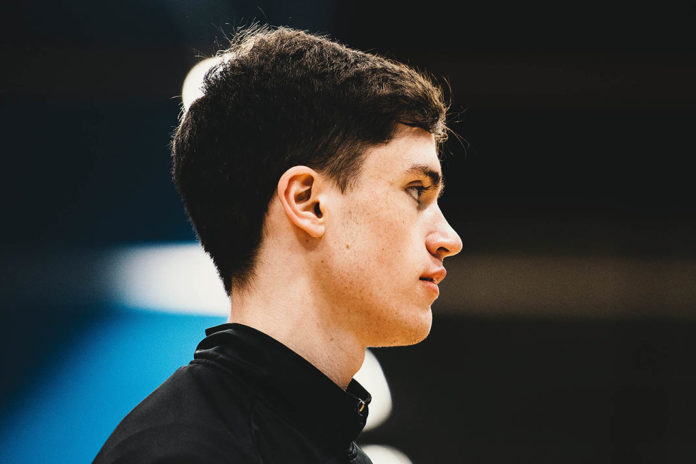 Mikey Irvine was an unknown name throughout junior British Basketball entering the 2019-20 season. He quietly played a role for Myerscough in four championship runs a year ago, including the Under-19 National Schools and Under-18 Men’s Playoffs, but ‘the buzz’ other teammates got never followed.

Fast-forward two months and the 6-foot-2 guard from Scotland quickly changed the narrative, becoming a major problem for opponents not only in England, but in Europe too. His confidence has grown exponentially and his ability to commit to hard work and not worrying about anything else earned him an EYBL All-Star Five selection in his competition debut and that’s been just the beginning.

Mikey has turned in two 20-point performances — both coming on the road — in Basketball England’s Division 2 and he currently ranks third in scoring on over 50 percent shooting from 3-point range on a deep Myerscough EABL team.

The stage is yours.

IT WAS A ‘JUMP’ ON A WHOLE DIFFERENT LEVEL. I knew coming into the season I could bring a lot to the team, but I wasn’t expecting to so soon. I’ve made big jumps like this in the past — just nothing compared to this. My progression has been a steady rise over the past year from consistently working hard and taking advantage of my opportunities.

THE HNBT TOURNAMENT CHANGED EVERYTHING. When we played in Holland, that’s when I started to realise I could play at a higher standard. I managed to make a difference against that level of competition and I knew if I could fix just a few of my mistakes I could elevate my game.

I’M MOTIVATED BY MY TEAMMATES. Myerscough gives you the tools to improve if you’re motivated. Having the court open gives me the chance to get in extra work away from training and being surrounded by some of the best players in the country has really helped my development as I get to train against a high level of competition every day.

THE EYBL HAS BEEN AN AMAZING EXPERIENCE. Going to Riga and playing at Stage I was one of the most fun times I’ve had on a basketball court and I’m extremely grateful for the opportunity to compete in Europe with Myerscough — Beating teams as good as Tallinn Kalev was really special.

IT TOOK TIME TO SINK IN THAT I WAS NAMED TO THE EYBL ALL-STAR FIVE. Before the first game I was unsure of what my place was on the team and receiving that level of praise from coaches of other teams was great for my confidence — It really validated a lot of the work I’ve put into improving my game.

THE GREAT THING ABOUT THE EYBL IS IT’S SHOWED ME I CAN PLAY THE EUROPEAN GAME. When I first came to Myerscough my ultimate goal was to play college basketball in the United States, but playing over in Europe has made me realise that path could be realistic option down the line.

I’M A FEARLESS PLAYER. Being aggressive and getting to the rim has always been apart of my game, and my confidence and ability to do so has greatly improved from training against the players we have at Myerscough.

WHEN THINGS AREN’T GOING RIGHT IT’S IMPORTANT TO STILL STAY ENGAGED. In games where you’re not clicking offensively it’s important to bring something else to the team, whether it be playing better defense, going after offensive boards and loose balls or getting the ball in the hands of the guy that’s hitting shots that day. Even if you’re subbed out you can still play from the bench by encouraging and motivating teammates.

CLEARING YOUR MIND FROM TIME-TO-TIME KEEPS BASKETBALL FRESH. A big thing that has helped stay motivated is taking the time to clear my mind and not think about basketball, as having your mind on the court all the time can make you burn out mentally.

I STILL HAVE A LONG WAY TO GO. Although I’ve made big improvements and had some success, I still know my place in the world of basketball and know I’ve got a lot of work to do if I want to reach my goals.