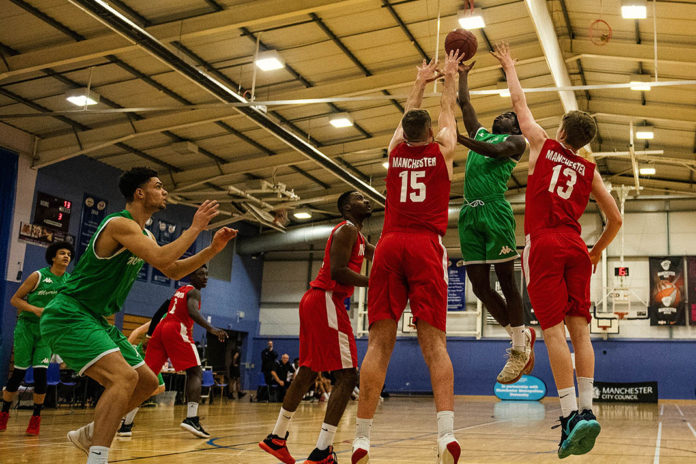 MANCHESTER – Sam Akano scored a team-high 16 points to go with four assists and Myerscough outlasted Manchester 80-79 on Sunday night to advance to the National Cup fourth round against Liverpool BC.

Myerscough alumni Andre Gayle hit a jumper fall away with 0.3 seconds left and appeared to send the game into overtime, but the Manchester Basketball Centre crowd’s jubilant eruption was short-lived.

His make was quickly ruled and confirmed as a two-point shot having had a foot clearly inside the arc when he took off.

“We were reminded in the loss to Derbyshire — something that will haunt us — what is required to win a game down the stretch,” said Myerscough head coach Neal Hopkins. “It’s good to come here and see the maturity in the clutch moments.

“Everything that we did leading up to the final buzzer was positive and the evolution of this team in pressure moments is very important. I think we saw a big step forward.”

Myerscough capitulated against the Arrows in its first Division 2 regular season defeat on Oct. 27, letting slip a six-point lead with four and a half minutes left before losing by three — Akano forced the Magic into a timeout that gave Sco the same advantage at 73-66 with 5:24 remaining.

It was the largest lead for either team in a game that saw 18 lead changes and nine ties.

“I wouldn’t have expected anything different from Martell in that moment,” said Hopkins. “It’s important that he knows how to control the game — that’s something we’ve been missing — and he made the play that we needed.”

The Magic battled back and got within 78-77, but never got a chance to take the lead after turning the ball over just past midcourt. Martell Elly would link up with Akano for basket off the ensuing inbounds play to put Myerscough up three with eight seconds left.

“We didn’t back down,” said Akano. “We showed the level we can play at when we’re focused and committed.”

Shaydon Eytle had his best game of the season going 4-for-4 from 3-point range and scoring 13 points off the bench. Myerscough hit nine threes and shot 50 percent from beyond the arc.

“It feels good to step up with some key players missing,” said Eytle. Myerscough was without starting point guard Bradley Kaboza for a third straight league game. “I am always looking to feed guys, making that extra pass, but it was nice for them to find me today.”

Mikey Irvine quietly added an efficient 13 points on 5-of-9 shooting a day after posting his second 20-point game. Amari Williams finished with 11 points and Sam Chigbo had 10.

Chigbo twice worked the pick and roll with Elly, who had seven assists, that led to easy two handed dunks. The second put Myerscough ahead 78-75 with 1:49 remaining.

Gayle and Richard Bell each scored 18 points for the Magic, who shot over 45 percent. Bell pulled in a game-high 16 rebounds, but Myerscough held a 42-35 margin on the glass.