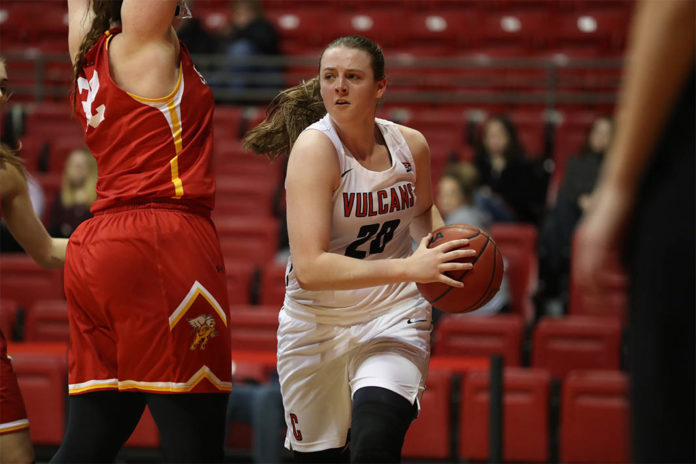 Harrison averaged 12.0 rebounds, 2.0 steals and 1.0 block with California University of Pennsylvania picking up two wins to improve to 15-6 overall and 9-6 in conference play in the process. The sophomore guard also posted 12.5 points to average a double-double.

The Sheffield, England native tallied 11 rebounds, including five offensive boards, and one steal, plus added seven points and four assists, in a 66-46 win over Clarion on Wednesday. She followed that up with a career-high 13 rebounds to go with two blocks and three steals in Saturday’s 76-59 victory against Slippery Rock.

Harrison reached double figures scoring for a 10th time this season against the Rock scoring 18 points on 6-of-11 shooting, including 5-of-6 from 3-point range. It marked her second double-double of the season and first since the opener back on Nov. 8 against Charleston.

As a first-year starter, Harrison ranks third on the team in scoring at 10.2 points and paces the Vulcans with 5.7 rebounds in 21 games. She ranks among the top 15 in the PSAC with 36 three-pointers made and 37 steals.