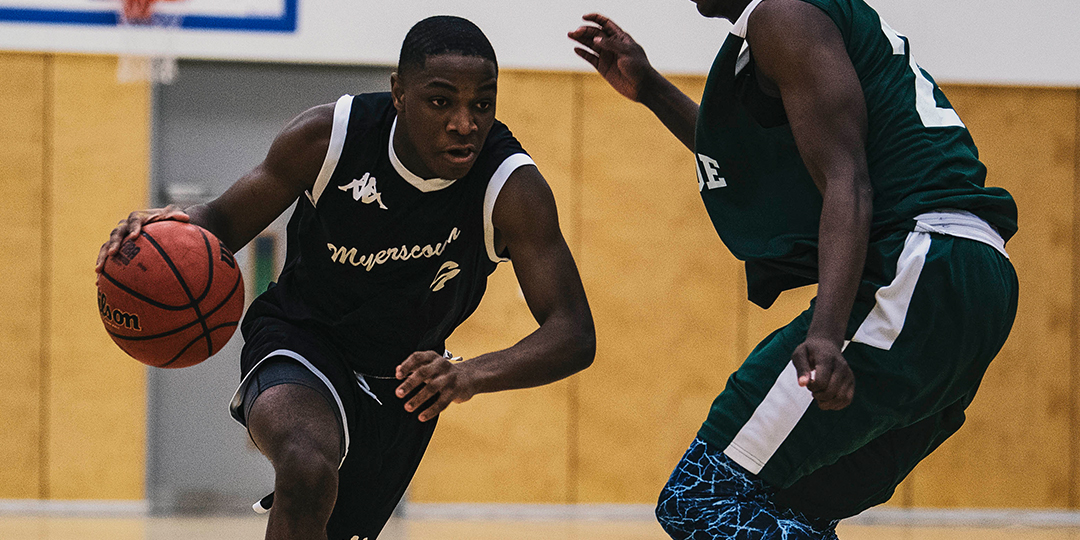 LONDON – Rayon Brown confidently sank two game-winning free throws with five seconds remaining to secure a win for Myerscough in a back and forth second half.

Brown combined with David Walsh to force a steal off the inbound just three seconds after Mate Okros had tied the game at 74-all with a floater in the lane.

The guard then stepped up and delivered a pair of clutch freebies before R. Wilson saw his attempt roll off the rim, as Myerscough escaped with a 76-74 victory over London Westside.

“I just knew I was going to knock those down,” said Brown, who scored just four points. “I told Dave before the steal ‘I don’t have time for overtime’ and we need to get this steal and we need to win this game.”

Okros scored a team-high 22 points — 17 coming in the first half — and hit four 3-pointers to lead Myerscough, but turned the ball over seven times. He finished 8-of-18 from the field.

Sanmi Fajana efficiently added 14 points on 5-of-6 shooting, including a perfect 4-for-4 from distance. Myerscough hit 43 percent of its shot from range, with eight of the 10 made threes coming before halftime.

Myerscough used runs of 11-0, which overturned a 3-point deficit, and 8-0 to build a 34-21 lead nearing the midway point of the second quarter. It would be Sco’s largest of the game and one Westside fought back against trying to avenge an early season 25-point defeat.

“It was an up and down game,” said Myerscough coach Neal Hopkins. “We did some great stuff early but they hung around and played us like men — it was difficult environment.”

Westside flipped a 47-37 halftime score, outscoring Myerscough 20-8 in the third quarter. Sco went 2-for-12 in the period and coughed up the ball seven times to allow London to carry a 57-55 lead.

Myerscough never let London hold an advantage larger than four and Walsh converted a 3-point play to cut it to a 63-62 game with 5:23 remaining before there were five lead changes and four ties.

“We talked before the game about the difference between making just effort versus a winning effort and down the stretch we made big plays,” said Hopkins. “They came back at us with a really good run but we snatched it away from them.”

London has dropped both its league games in 2019 and was led for a second-straight game by Wilson. The guard scored 26 points, posting consecutive 20-point performances. D Morris hit 4-of-5 3-pointers and had 16 points and 11 rebounds.

Myerscough overcame a large disparity on points in the paint, being outscored 42-26 and edged 32-26 on the glass. London turned Sco’s 17 turnovers into 14 points and and ran the floor for a further 14.