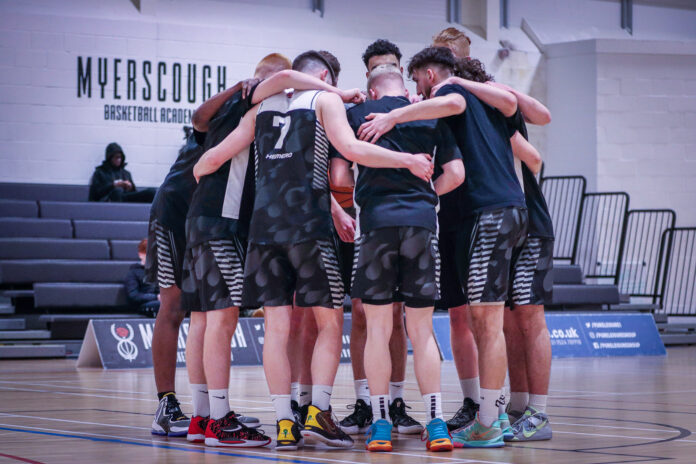 Myerscough lost out in overtime on Saturday to Nottingham Trent Hoods (85-80), a depleted ‘Sco side then fell at home on Sunday to Bristol Flyers (81-85) in a tough double header weekend for the NBL Division 2 side.

Nottingham – It was a heave on the buzzer that secured overtime for the Hoods, as Myerscough, who had led by 3 with seven seconds to go (in regulation) in Nottingham couldn’t close out the victory. With the momentum behind them, the Hoods outscored Myerscough 9 – 4 in OT to grab the W.

‘We just needed a little luck on the last possession’ Said Myerscough Head Coach Neal Hopkins, ‘Sometimes those shots fall, most of the time they don’t, today wasn’t our day’.

Daniel Kelsey had his seasons best performance, the big man collected 22 points to go with 16 rebounds.

It was a quick turn-around for Myerscough, who then faced off against Bristol Flyers on Sunday. In a well contested game, a 14 – 2 run over the last 4 minutes of the 3rd quarter proved decisive in giving Bristol the separation they needed. Despite a spirited fight back from Myerscough, Bristol were able to hold on for a 85 – 81 victory.

Pedro Ellery came away with 25 points in the loss, Sam Cheshire added 19 for Myerscough.

Myerscough will be back in action on Sunday 27th February, taking on Northamptonshire Titans at home.

Filippo Renna and Jack Hencher combined for 39 points in the victory, as Myerscough maintained their current good form.

In a game of two halves Myerscough ran out to lead 31 – 19 after the first quarter, the excellent pace and ball movement from the young Myerscough side carried through into the second period and despite a resurgent second half effort from the Giants, Myerscough were able to close out a comfortable victory, moving to 8 & 6 for the season.

Under 18 Conference – It was another impressive performance from Mike Bernard’s men as they cruised to 72 – 48 win away at Lancashire Spinners.

‘It was great to see the guys moving though the gears, we opened up the score in the four and scored easily, it was a great team effort and the despite the fact that we were short handed the boy played well to pull off the win away from home’ Coach Bernard said.