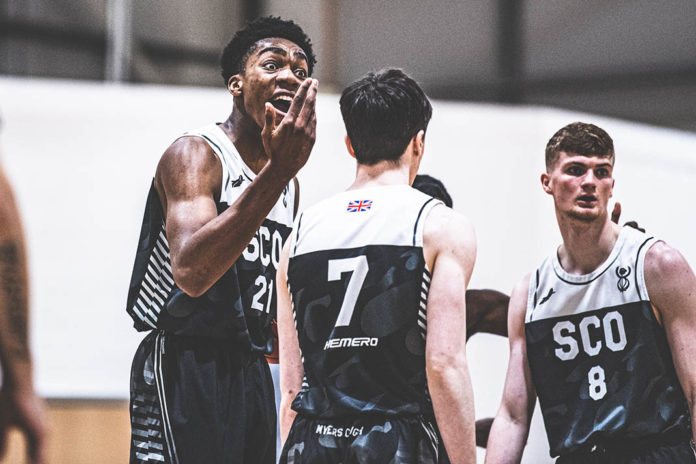 PRESTON, England – For 35 minutes it appeared as if No. 1 seed Myerscough would again come up one hurdle short of reaching the EABL Finals, this time against No. 2 seed John Madejski Academy.

But Myerscough dug deep, overturned an early 12-point deficit, and then put together a fourth quarter run to sprint past JMA for an 82-74 win on Wednesday afternoon to set up a rematch versus South Conference No. 1 seed Barking Abbey.

“It was a really tough game,” said Myerscough head coach Neal Hopkins. “But our character shone through down the stretch and we made the right plays at the right time and that’s what is important – yes, our performance might not have been the best, but at this point it is about winning.”

Trailing 63-60 entering the fourth quarter, Myerscough fell behind by five before an 8-2 run pushed it ahead 68-66. JMA twice tied the game, but Lewis McGlasson and Amari Williams went back-to-back from 3-point range to break a 70-all tie with 4:23 left.

“They were two really big possessions,” said Williams, who led Myerscough with 21 points. “That was my only three of the game, so for that one to go at that moment in time was really crucial.”

JMA was in control from the tip, building an advantage as large as 12 points behind three 3-pointers. Ross Stepney capped off a 15-2 start with his second triple of the game.

Myerscough settled in and used an 8-0 run to close within 19-16 and found itself fortunate to only trail by five after the opening quarter. But back-to-back layups pushed JMA’s lead out to nine.

Great Osobor scored all six of his points in the first half with five coming in a row to spark a 7-0 flurry and give Myerscough its first lead of the game at 39-37.

“I had the confidence to take my shots,” said Osobor. “In those situations when I come off the bench, I have to bring something and today it just happened to be a bit of offence. We’ve all bought into what Neal [Hopkins] has been saying to just do our job to the best of our ability and we will keep winning.”

There were six ties and six lead changes after halftime, including three of each in the fourth quarter. The last came with five minutes go to when McGlasson, who chipped in 19 points, eight rebounds and four steals, connected from the wing.

Bradley Kaboza struggled on 4-of-12 shooting but added 14 points and Franklin Agu had 11 for Myerscough (16-0), which converted just 66.7 percent at the foul line and hit 4-of-9 in the fourth quarter to help close the game out.

Stepney had a game-high 22 points on 9-of-14 shooting and David Chive added 20 to go with 12 rebounds for JMA (14-3) in the loss. Latrell Maitland and Kivuvu Live each scored eight points.

Myerscough was outrebounded in the EABL for the first time all season. JMA held a 48-37 margin on the glass, but Sco had a narrow 15-12 edge at the offensive end.

Myerscough relied on its defence to claw its way back into the game and scored 27 points off 26 JMA turnovers. It was the eighth time Sco had forced an opponent into 20-plus turnovers — The Rockets’ Chive matched his game-high of five assists by tying for a team-high five turnovers.

Myerscough was the only team from the north to reach the Academy League Final Four, including the EABL, WEABL and ABL. The South Conference’s JMA was the second-most northern team remaining.