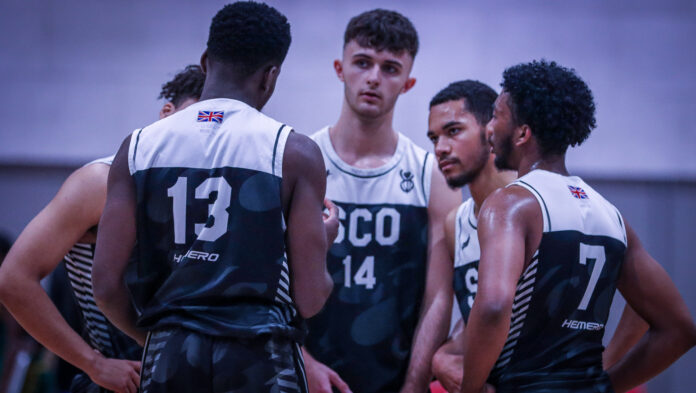 Manchester | U17 Final – In a final that neither team deserved to lose, Myerscough were narrowly edged out by St Aloysius College, 79-75.

As hard-fought as it was entertaining, neither side could gain a foothold in the contest and only twice would the lead go past four points for either team.

Myerscough trailed by as many as 10 in the second quarter before a late surge would see Kamarni Steadman sink a three off an offensive rebound as the deficit was pulled back to 43-44 at half-time.

A low scoring third quarter would set up an exciting ending in a true North versus South battle as both teams were locked at 56-56, with ten minutes to play. The London side moved ahead when it mattered most though, going ahead 70-62 with 2:53 remaining before surviving a late Myerscough fightback to ice the game from the line.

Manie Joses had 17 points and 12 rebounds for the double-double which would see him claim MVP honours, whilst Berkay Sahin (21pts), Remy Udeh (18pts, 10reb) and Tyresse Poku-Mensah (12pts, 5reb, 5ast) all contributed.

Manchester | U19 Final – Myerscough led 27-22 at the half but came unstuck after the break, recording just 18 second-half points as JMA ran out with the victory, 51-45.

Taylor Campbell opened Myerscough’s account on the opening play and with defense leading the way, saw Sco’ ahead 16-8 at the end of the first quarter. Myerscough’s Ben Prince would open the biggest lead of the game at 26-13 with 4:40 remaining before momentum would shift the opposite way and JMA would close the gap at the break, 27-22.

Myerscough’s offense would dry up in the second half as they only managed a further 18 points in the game which gave opportunity for JMA to complete the comeback win, 51-45.

Myerscough’s offence was paced by Ben Prince’s double-double as he dropped 15 points whilst pulling down 18 boards whilst Cole McMahon (7pts) and Taylor Campbell (6pts) offered some assistance for the North-West side.

Rhys Grocott recorded a 14-point, 10-rebound double-double off the bench to claim the MVP award, with Sean Treacy contributing a game-high 16 points to go with 10 boards for JMA.