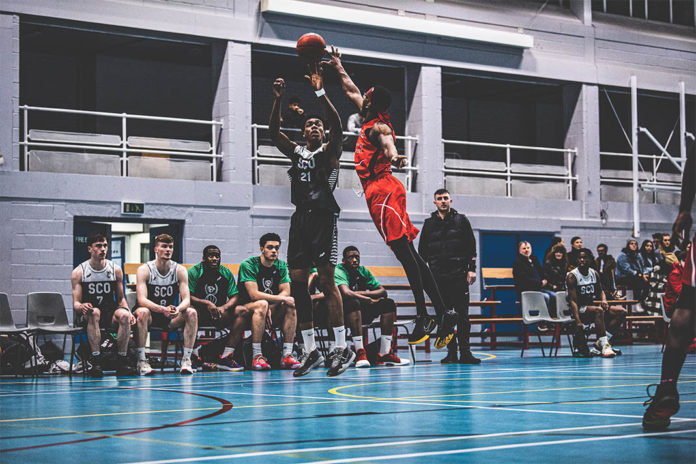 DRONFIELD, Derbyshire – Myerscough defeated the University of Chester and the Derbyshire Arrows to extend its Division 2 winning streak to six games over the weekend.

Amari Williams tied for a game-high 22 points on Sunday to help Sco avenge one their two losses this season, with an 85-73 win over the Arrows.

Myerscough, which led by five at halftime, used a 16-6 stretch to establish a double-digit lead at 61-46. Derbyshire got within nine points twice – the second off Joseph Baugh’s jumper with a minute left – but the Arrows would get no closer.

Lewis McGlasson had a big weekend for the Academy. The third-year guard compiled 37 points in two games on 12-of-24 shooting, including 7-of-13 from 3-point range.

McGlasson had 20 points against the Arrows, knocking down 5-of-8 from distance a day after tying for a team-high 17 points in the comeback win at Chester.

Myerscough overturned an early 15-point deficit on Saturday to upend Chester and halt the opposition’s four-game winning streak. Sanmi Fajana scored 17 points to go with seven rebounds and four assists in the 85-78 victory.

Chester had jumped out to a 20-5 advantage and forced a timeout with 3:54 left in the opening quarter. Myerscough responded with a 12-0 run to cut the gap to 20-17, before the game saw nine lead changes and five ties.

Mikey Irvine’s 3-pointer broke a 66-all deadlock with under six minutes to go and an 11-4 stretch gave Myerscough 82-74 lead with 66 seconds left.

Franklin Agu chipped in 12 points on an efficient 5-of-6 shooting and Bradley Kaboza finished with 10 points, seven rebounds and five assists against Chester.

Agu totalled 26 points on 78.6 percent shooting and hauled in 11 rebounds in 19 minutes per game.