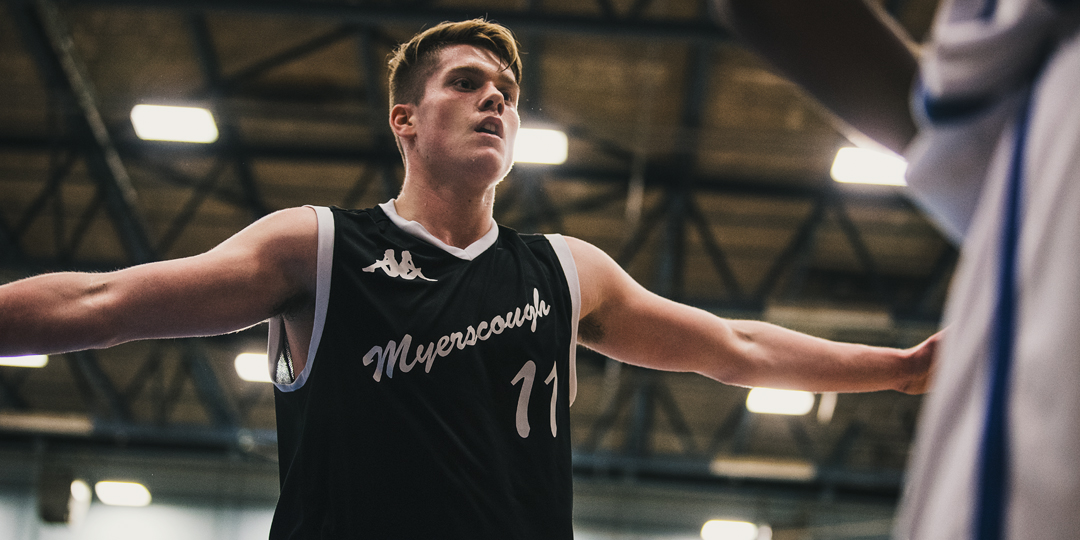 Myerscough, which is coming off a 3-2 record on its debut in Estonia in September, will also face BC Barsy on Friday, before games against BC Zalgiris, BG Lulea and Group B foe Valmiera BSS.

The Preston-based college got off to a hot start with wins over TTÜ Korvpallikool and Västra Hisingen, but suffered back-to-back defeats to BA Tallinn Kalev and BC Helsinki ROCKS on Day 2. Myerscough recovered to dispatch BC Alvik Basket 65-55 and hold eighth place overall in the league standings amongst three teams with the same record.

Recent Drexel University commit Mate Okros paced Myerscough as the team’s leading scorer, and ranked 10th overall across the entire competition, at 13.8 points per game on 41.5 percent shooting (22-of-53). Okros scored in double-figures in four of five games and matched a team-best of 22 points against BC Alvik Basket to close Stage I.

Sanmi Fajana lead Myerscough in rebounding in Tallinn, grabbing 7.6 per contest including 2.8 at the offensive end. The 6-foot-8 forward chipped in 9.6 points — ranked second on the team — and posted back-to-back double-doubles against Helsinki and Alvik.

Callan Low tied for first on Myerscough with 2.0 assists and 2.0 steals over the course of Stage I, and the Newberry College commit added 8.6 points. Low exploded for 22 against BA Tallinn Kalev after scoring just 12 during the first two games.

BC Ventspils (2-3) enters Stage II on the heels of back-to-back defeats in Poland, including a narrow 65-64 decision to BG Lulea. The hosts have the sixth ranked offence in the league averaging 64.2 points per game on 39.9 percent shooting.

Ralfs Erksis, who ranks sixth in the league with 15.0 points per game, leads three players in double-figures. He hit at least three 3-pointers in three games and is shooting the three-ball at 41.1 percent.

BC Barsy (2-3) is led by Marko Lukic’s 11.2 points per game. Lukic is the team’s lone player scoring in double figures, but nine others are averaging at least 3.3 points, including forward Viktor Verzun who is grabbing 8.2 rebounds to go with 5.6 points and a block.

The Kazakhstan-based team has the fourth lowest offensive output in the league at 57.4 points per game, but boasts the sixth best defence affording opponents just 52.6 points, which is just a 4.4-point margin away from number-one ranked BA Tallinn Kalev.

Barsy picked up wins over KS Cracovia and TBV Start Lublin, but is coming off a 58-48 loss to BC Zalgiris, who is currently second in the league behind Tallinn Kalev.

Modestas Kancleris ranks seventh in the EYBL in scoring at 14.2 points per game to lead BC Zalgiris (4-1), which owns the league’s best offence and third ranked defence.

Zalgiris is pouring in 70 points per game while allowing 51.4, with its four wins coming by an average 34-point margin. The Kaunas-based club recorded lopsided victories of 76 and 33 points in Poland.

The team’s lone loss — a 66-53 defeat — came against unbeaten and EYBL leaders BS Riga to end Stage I. Kancleris, who also ranks second in the league with 8.2 rebounds, was held to just five points a game after scoring a personal-high 22 points.

Gabrielius Celka played just 57 seconds the opening game, but rebounded and ranks second on the team in scoring at 11.6 points. The forward is shooting 82.1 percent from inside the paint and has made 9-of-12 free throws in five games.

BG Lulea (4-1) is riding a four-game winning streak after suffering an opening defeat in Stage I to SMS PZKosz Władysławowo. The Swedes left Poland with a 65-64 win over BC Ventspils, where Gustav Moberg scored a game-high 24 points on 10-of-22 shooting.

Moberg is the league’s offensive leader and one of two players from Lulea to rank in the top five in scoring. He had four 20-point games, including a season-high 27 points against TBV Start Lublin, and averages 22.4 per contest. Pelle Larsson has added 15.2 to go with 7.2 rebounds, which is a team-high.

Lulea sits fourth in the EYBL, where its best finish was ninth in 2014-15. Its 67.6 points per game ranks third in the league while the defence was third worst over Stage I in Poland.

Group B opponent Valmiera (1-4) is coming off a second-place finish in the competition a season ago, where it lost to Georgia in the EYBL Finals, but has made a difficult start to the season. Back-to-back losses highlight Stage I in Tallinn — the most recent a 77-60 decision to BC Tsmoki-Minsk.

Elvis Brokans leads the Latvians in scoring at 14.2 points per game on 42.1 percent shooting and is aided by Roland Pulins’ 13.2 per contest. Pulins is hitting 46.7 percent of his shots, but he failed to reach double-digits in the final two games after doing so in each of the first three.

Valmiera is deadlocked with Alvik in 13th place and is allowing the third most points to opponents at 67.8 per game. But its offence is ranked seventh in the league.