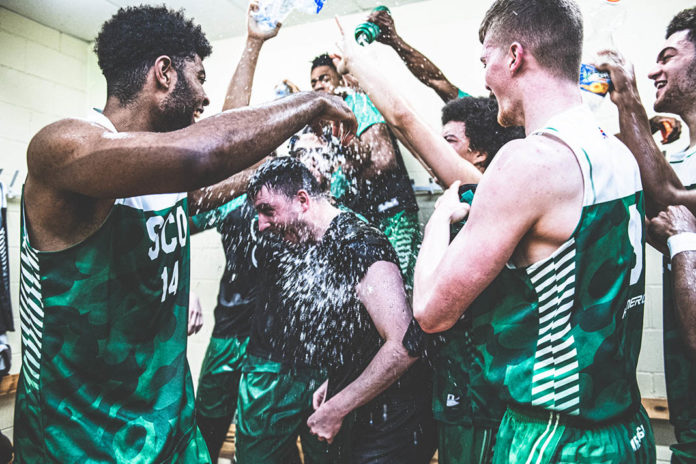 VALMIERA, Latvia – Myerscough Basketball Academy is headed back to the European Youth Basketball League (EYBL) SuperFinal – this time as league champions after winning the regular season with a 14-1 mark overall to become the first British basketball team to claim a season-long European competition title at any level.

The Preston-based Academy extended its league winning streak to 12 games in the process after going unbeaten with a 5-0 record for a second-straight stage and finishing in first place at Stages II and III.

For a second year in a row, a one-loss team has captured the EYBL regular season championship in the under-20 competition staged over three weekends, as Myerscough edged BA Tallinn Kalev (13-2) for the top spot.

Myerscough joins former champions whose senior teams compete in the EuroLeague, Champions League and Europe Cup, including BC Khimki, BC Zalgiris, BC Ventspils and BC Tsmoki-Minsk (Minsk, Belarus).

Bradley Kaboza, who is the current No. 5 ranked prospect in the DENG Camp Class of 2020, repeated as the EYBL’s Most Valuable Player at Stage III. The 6-foot-2 guard and native of London, England ranked second overall in scoring in Valmiera with 17.0 points per game and he matched this season’s best individual performance with an EYBL career-high 31 points against BS DSN (Riga, Latvia).

“This team is special,” said Kaboza. “We’re not phased by anything — if we’re down, up or in a close game — that goes from the coach down to the last man on the bench and that’s something you don’t find in every team. That makes us effective and I’m lucky to be playing with these guys.”

Myerscough swept aside SPB University (St. Petersburg, Russia) before staging a late comeback to beat hosts Valmiera BSS 77-73 to conclude Day 1. Valmiera led 67-71 with 5:21 left before Kaboza, who scored a then career-high 23 points, knocked down a 3-pointer and Sco outscored their opponent 16-6 the rest of the way.

A 20-point win over NBA All-Star Kristaps Porzingis’ Academy BS DSN would clinch Myerscough’s berth in the SuperFinal. Sco then wrapped up the competition by beating nemesis Tsmoki-Minsk – a team they had yet to defeat.

“The EYBL has given us an experience we’ve not been able to get in the United Kingdom,” said Myerscough head coach Neal Hopkins. “The 33 games we’ve played in this competition, including the SuperFinal last year, has all amounted to where we are now.

“You have to give a lot of credit to the guys, particularly the ones we’ve returned. Bradley [Kaboza] and Amari [Williams] have grown throughout the process and it’s been a pleasure to watch. It’s nice to win and be a coach in that position but it’s more important to see these guys develop and become the team they are.”

Myerscough made an improbable run to the 2019 EYBL SuperFinal in its first year in the competition, which included an eight-game league winning streak. The Academy would ultimately finish fourth in the championship stage, but that laid the foundations and expectations in Year 2.

The lone loss this season – a 56-49 defeat to Keila BS (Estonia) at Stage I back in September – led to a run of 12 consecutive wins, including 10 coming by double-digits.

Myerscough has had two representatives in EYBL All-Star Five this season. Mikey Irvine and Lewis McGlasson both received the honour following Stage I and II, respectively.

Franklin Agu was voted by the opposition coaches as Myerscough’s Best Player following his performance at Stage III, where he reached double figures scoring in three games and ranked third in rebounding at the Valmiera phase.

“Not everyone has been able to experience this type of level of basketball so it’s a great feeling to be part of something so rewarding,” said the 6-foot-6 forward. “I want to do anything I can to contribute to the team so we can keep putting ourselves in positions to be successful.”

Myerscough has become a formidable and respected opponent in Europe – an achievement that has been built over several years of venturing into the continent – and its triumph in the EYBL has validated that pursuit.

“We’ve been fired up and energised and we’ve known what it was going to take to win this league,” said Hopkins. “To take the title against programmes that have EuroLeague, Champions League and Europe Cup pedigrees and have outstanding professional teams sitting above them – to do what we’ve done as a programme from the United Kingdom speaks volumes about our determination to make our mark in Europe.”