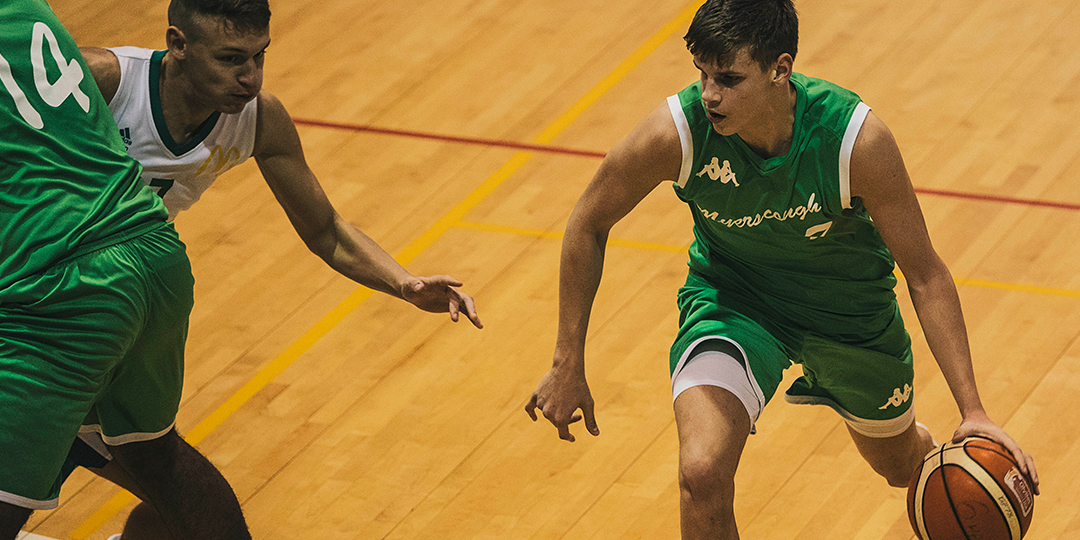 PRESTON – Myerscough begins its quest to reach the European Youth Basketball League (EYBL) Final Four in its maiden season when it opens up Stage III against KS Cracovia at 9:30 a.m. local time on Friday, Feb. 22 in Lublin, Poland.

Myerscough, which finished fourth in Latvia with a 4-1 record back in December, will also matchup with SMS PZKosz Władysławowo and on Friday, before games against TBV Start Lublin, BS Riga and Group B foe Tsmoki-Minsk.

Myerscough currently sits outside the top four in fifth place amongst two other teams holding 7-3 records overall. Sco will face both — Tsmoki-Minsk (3rd) and Riga (4th). A sweep of Stage III unequivocally secures a place in April’s Final Four while a second consecutive 4-1 mark would require some help. There are also four teams sitting at 6-4 and chasing an outside chance of continuing their seasons.

Tsmoki-Minsk and Riga, meanwhile, square off against one another to start their Stage III schedules, with tip set for 10:20 a.m. local time and one is set to pick up a fourth loss on the season before playing Myerscough.

The Preston-based college dropped its opening game at Stage II against hometown BC Ventspils, but then reeled off four-straight victories, including a signature triumph over European youth powerhouse BC Zalgiris, to firmly join the chase for the Final Four.

Drexel University commit Mate Okros continues to lead Myerscough offensively and ranks ninth in the league in scoring with 13.6 points per game. Okros has scored in double-figures in four straight games and his 26-point performance — a season-best — lifted Myerscough past Zalgiris.

Sanmi Fajana has been a force in the frontcourt where he’s averaged 10.5 points and 6.9 rebounds, including 2.5 offensive boards. The 6-foot-8 forward has three double-doubles on the season and had personal bests of 18 points versus BC Barsy and 12 rebounds against Valmiera at Stage II.

Myerscough has the sixth best offence and defence at 60.4 and 54.5 points per game, respectively. Sco has hit 42.3 percent of their shots and assisted over half of 229 made field goals.

KS Cracovia (2-8) enters Stage III looking to play spoiler for a trio of teams — Myerscough, Tsmoki-Minsk and Riga — with hopes of booking their place in the Final Four. Cracovia has struggled at both ends of the floor, holding the league’s worst offence at 47.5 points per game while allowing opponents 67.3, which ranks 13th.

Patryk Michalowski leads the team in scoring with 9.5 points per game on 64.4 percent shooting to go with 3.8 rebounds. He’s scored in double figures five times this season and had a season-high 19 points against BC Zalgiris all the way back on Sept. 14.

Cracovia’s biggest win of the season came against TTÜ on Dec. 15. Jakub Niescior and Piotr Cebula each scored 10 points in a low scoring, 48-45, score line.

Władysławowo (5-5) ranks middle of the road in the EYBL with the 12th scoring offence and ninth scoring defence. A 3-2 record at Stage II in Goteborg, Sweden, however, saw it finish in third place.

Radosław Subinski is one of two averaging double figures in scoring for Władysławowo at 10.7 points per game on 45.5 percent shooting. Subinski has reached double figures in six of the last seven games, including four straight at Stage II where he scored above his season average with 14 per outing.

Michal Krasuski ranks second with 10.1 points and first on the team making 1.9 steals per game. Szymon Zapala has added 7.9 points to go with 5.9 rebounds in a stretched of 18 minutes of action.

Lublin (4-6) also find itself in a position to trip up an opponent and play its way into a top 10 finish. The hosts have averaged 58.9 points per game, which ranks ninth in the league, but have had trouble stopping teams with the 15th-rate defence allowing 70.5 to opponents.

But Lublin does boast the EYBL’s leading scorer, Bartłomiej Pelczar. Pelczar is averaging 24.7 points per game on 40.7 percent shooting, and he ranks first on the team with 2.8 assists and 1.5 steals.

Pelczar has had three 30-point games and six 20-point games, scored in double figures in nine of a possible 10, and posted a season-high 36 points in a 69-66 loss to TTÜ on Dec. 15. The guard has hit six 3-pointers in back-to-back games and is coming off a 29-point performance in a loss to Riga.

Jan Piliszczuk ranks third in the league in scoring at 16.3 points per game to go with 6.2 rebounds. He’s shooting a rate of 48 percent and has hit 13-of-39 3-point attempts.

Riga (8-2) is the first of two opponents at Stage III vying for a coveted place in the Final Four. The Latvians are coming off a second place finish in Sweden and riding a two-game win streak with victories over Vastra Hisingen and Lublin.

Ranked fourth offensively, Riga has four players averaging double figures and eight chipping in at least 6.1 points. Niks Salenieks’ 12.6 points per game on 47.7 percent shooting leads the team. Salenieks, who is also grabbing 3.8 rebounds to go with 2.8 assists, had a season-high 24 against Lubin to close out Stage II.

Roberts Berze is adding 12.3 points at a clip of 54.2 percent, including hitting 9-of-13 3-pointers. Berze scored above his average in Sweden — 15.5 — and had a season-best 23 points in the loss to TTÜ Korvpallikool.

Gustavs Kampuss leads Riga in rebounding with 5.2 boards per game to go with 11.2 points and Ricards Mugurevics is contributing 11.

A place in the Final Four could come down to a showdown with Group B opponent Tsmoki-Minsk (7-3), who currently sits third with the best 7-3 record on points difference. Myerscough watch the Belarus-based club walk away with second place in Latvia with four teams finishing with a 4-1 record.

Minsk closed out Stage II with a 68-46 win over Barsy to stretch its win streak to three games. Minsk scored right at its average of 68.4 points per game — ranked the third best offence in the league — and held Barsy well below the 54.6 it normally gives up.

Uladzislau Blizniuk, who was named to the EYBL All-Star Five in Ventspils,  ranks sixth in the league in scoring at 14.1 points and fifth in assists with 3.5 per game. Blizniuk is shooting the ball at 44.2 percent and he’s scored in double figures in every game this season.

Minsk has a deep bench with nine players averaging at least five points, including the league’s leading rebounder, Vadzim Stubeda. Stubeda is pulling in 7.8 boards per game — 2.9 at the offensive end — to go with eight points. The forward grabbed seven offensive boards en route to 14 total to close Stage I.

Vadim Tretsiak has knocked down 11-of-28 3-point attempts and his 8.2 points ranks second on Minsk.

For more information about the EYBL, vist: www.eybl.lv.