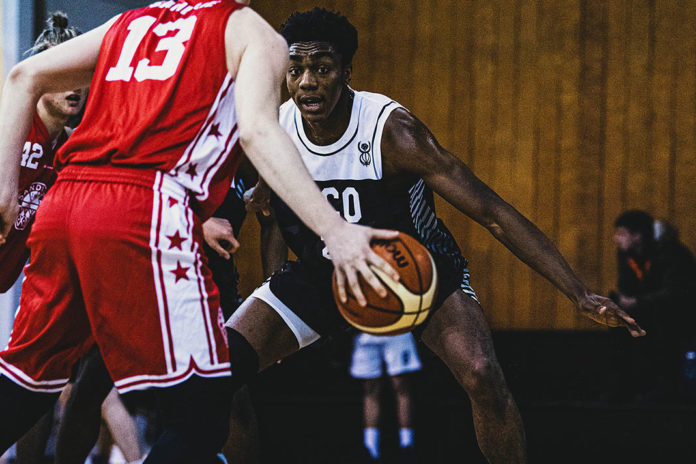 RIGA, Latvia – Myerscough opened Stage II of the European Youth Basketball League season with a pair of wins on Friday in Riga.

Franklin Agu amassed 28 points in the opening two games and matched a season-high with 15 points in the 69-47 Game 1 win over Sandvika BBK (2-5). Agu has scored in double-figures in three-straight games dating back to Stage I.

Myerscough (6-1), whose largest deficit of the game was one point, pushed its advantage into double-digits with a 6-0 run to take a 29-17 lead. Sandvika got within nine after halftime, but no closer. Lewis McGlasson and Ridley Shema went back-to-back from 3-point range to spark a 9-0 burst with under five minutes remaining.

The bench came up huge — led by Agu. Bradley Kaboza chipped in 10 points and Shema added 10 on his EYBL debut, going 3-for-4 from the field with a pair of threes in five minutes.

Myerscough shot 47.5 percent from the field and hit all six of its 3-pointers after halftime having gone 0-for-7 to start the game. Sco outmuscled Sandvika 46-26 in the paint and 21-4 on points off turnovers.

Great Osobor, who made his first two starts, then helped Myerscough fight back for a 54-41 victory over BC Liepaja (2-4) to extend the team’s winning streak to four games. Osobor hit 8-of-11 shots on his way to a game-high 18 points and Agu added 13.

BC Liepaja led by as many as seven points, which was erased by a 9-2 Myerscough run. A 12-2 stretch that spanned either side of the break vaulted Sco into a 35-26 lead, with points coming off three straight Liepaja turnovers.

Mykyta Rozdobudko and Valters Vucins each had 10 points for Liepaja in the loss. Myerscough held all of Sandvika under double-figures scoring to open the stage.