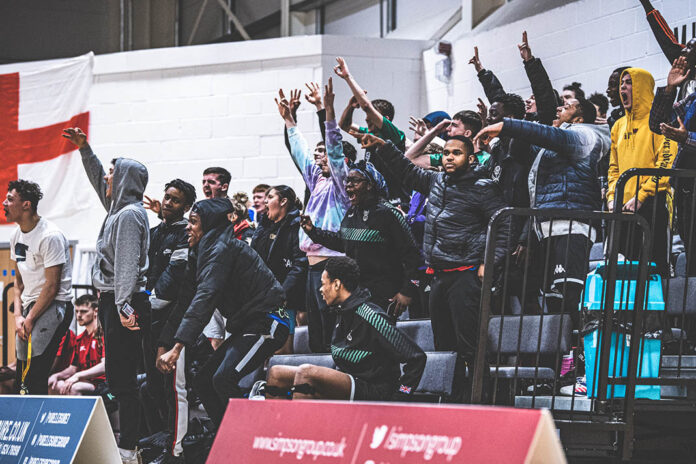 The 2019-20 season was prematurely ended coronavirus pandemic that saw the cancellation of the remainder of the National League, Academy League and EYBL schedules, including the EABL Finals and EYBL SuperFinal.

But despite the disappointment for Myerscough student-athletes, there were still plenty of memorable moments and achievements to celebrate. As the uncertainty rolls on within the basketball community of when the sport will be able to resume, look back at the top 10 individual performances of 2019-20.

10. Louis Sullivan vs. Manchester (U18 Premier)

Despite the result, which saw the Myerscough Under-18 Men’s team slip to a narrow 75-71 defeat to its Manchester counterpart, Louis Sullivan came out of the gates hot with a 40-point performance on Oct. 6, 2019. It would stand as the highest individual offensive output from any Myerscough player during the 2019-20 season.

“Sully” would use the early confidence boost to springboard a strong season in Division 3, where he was named Troy Culley’s Coach’s Player of the Year.

Joseph Bankole caught fire, hitting 6-of-8 3-point attempts to help Myerscough sweep aside James Watt early in the year. His six 3-pointers made would stand as the most made in a single EABL game by any Sco payer during the 2019-20 season.

He would go on to be named Troy Culley’s Most Improved Player in Division 3 after stepping into senior national league play.

Celina Eisenhardt was just one of four different Myerscough players to post a 30-point performance in the National League (Men or Women’s) and Academy League play. She had two such games, including 34 points against Sheffield in the WEABL.

Celina hit 47.6 percent of her shots en route to her 31 points, which included 12 rebound and three assists. She averaged 17 points per game during the 2019-20 Division 2 Women’s season. Head coach Mike Bernard named her as the Coach’s Player of the Year.

Franklin Agu set Division 2 career-highs of points (20) and rebounds (15) in Myerscough’s 65-63 win at Manchester in October. Sco would go on to hold off the Magic for a thrilling 65-63 road win.

Franklin had a strong first year in senior basketball, scoring in double figures 12 times and ranking second on the team in rebounding at 7.6 per game.

When you’re hot, you’re hot — And that was the case for Henry Lythe de Pee who came alive against QE York hitting six 3-pointers before halftime. The performance cracks the Myerscough top 10 individual performances of the 2019-20 season at No. 6, but will long be remembered as the last game of the year before Basketball England’s cancellation of the remainder of the schedule to COVID-19.

Myerscough would go on to blow out its opponent on a rare Thursday night Junior National League game.

Simple but effective. That’s the best way to describe Ben Nailer’s performance against West Lancs, as well as his post-game reaction. Ben knocked down 13-of-24 shots — good for 54 percent from the field — en route to a career-high 37 points and the Myerscough U18 Men’s team won 93-84 to extend its winning streak out to three games.

Ben’s 37 points ranks behind just Sully’s 40-point performance for highest offensive output by any Myerscough player in the National League or Academy Leagues during the 2019-20 season. Throughout the year, Ben earned head coach Lewis Scott’s admiration and was named Coach’s Player of the Year at the conclusion of the season.

Bradley Kaboza posted the first of a trio of 30-point performances he would have throughout the 2019-20 season back in October. Myerscough, meanwhile, won the game 105-93 to improve to 4-0 in the EABL.

SPOILER: Bradley went on to have an incredible season, locking up an All-EABL First Team selection, as well as a Player of the Week honours in Week 16. More to come on that. He was a two-time EYBL Stage MVP (II and III) and currently ranks fifth in the DENG Camp Top 20.

Ridley Shema set a Myerscough career-high to help the under-18 men’s team outlast Edinburgh in overtime.

During his short spell at the Academy before moving on to America, Ridley featured for the Under-18s and the EYBL team at Stage II in Riga.

Bradley Kaboza had quite the 2019-20 season. His 31-point effort on 12-of-21 shooting, as well going for 5-for-5 at the free throw line, against BS DSN helped lock up the European Youth Basketball League regular season championship — The first season-long European competition triumph for any British basketball team at any level.

Bradley would go on to earn his second-straight EYBL MVP award at Stage III after guiding Myerscough to a 5-0 record in Valmiera, Latvia.

Bradley Kaboza posted a career-high 36 points as part of a comeback win to help Myerscough along the path to an EABL North Conference championship. He was efficient, hitting 11-of-19 from the field, including a trio of 3-pointers, and finished 11-of-13 at the free throw line. Sco ran out 91-81 winners and improved to 11-0 on the season with three games remaining.

“I’ll do anything to help the team,” said Kaboza after the win. “When you have brothers that are willing to battle alongside you, it’s the best feeling. I live in those moments and I’m glad we could come out with the win.”

Bradley, who was selected to the All-EABL North Conference First Team, would earn Player of the Week honours for his performance.