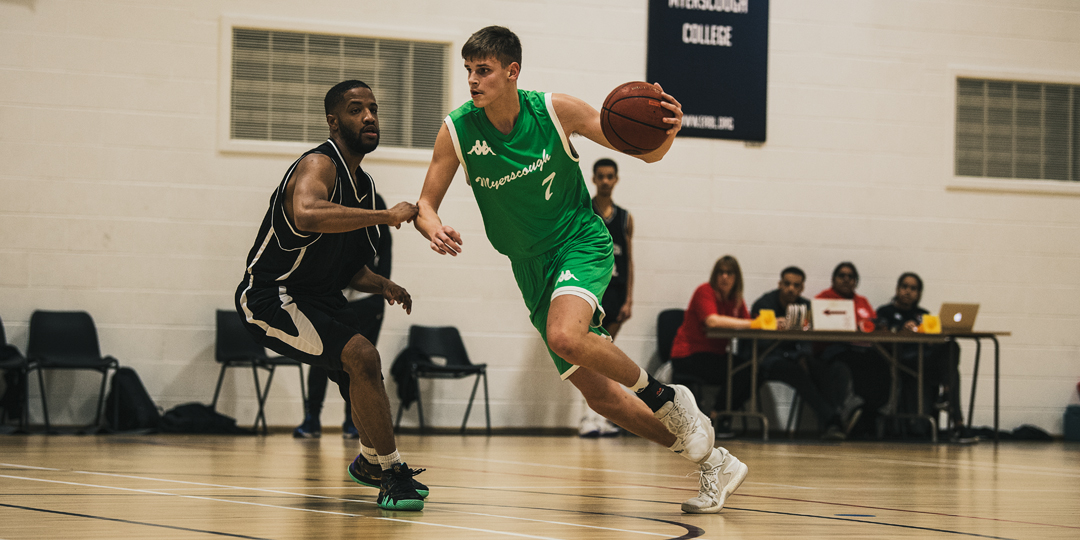 “I’m just trying to come in and get the ball moving and find my shot from there and not force anything,” said Okros. “I worked to get the rebounds and I got the assists first and then obviously the guys found me when I was open.”

Amari Williams hit all five of his shots to finish with 12 points whilst Sam Keita and Bradley Kaboza each scored 10 for Myerscough, which shot 48.8 percent and connected on eight 3-pointers.

Four of those 3-pointers, including back-to-back jacks to spark the burst, came during a 20-5 run over a four-minute stretch that built a 26-14 Myerscough lead. London Westside cut it to a six-point game early in the second quarter, but then trailed by as many as 17 throughout the opening half.

Okros, who started the game 5-for-5 before finishing 10-of-13 from the field, capped off a 14-point first-half with a dunk to give Myerscough a 61-45 lead at halftime and the advantage would swell to 27 after the break.

“We’ve really talked and emphasised the need to protect our home court,” said Myerscough coach Neal Hopkins. “We know from having experienced how difficult the travel can be, so we have to jump on teams when they come here. I was impressed in the way we went about our business today.”

A week after giving up 15 offensive rebounds for 21 second chance points in a 63-62 win at the London Greenhouse Pioneers, Myerscough shipped 11 in the first-half against Westside before clamping down and only allowing three in the second 20 minutes.

Myerscough spent the last two days of practice hitting the glass and it paid off as it won the rebounding battle overall by a 54-38 margin, including 17-11 in offensive boards. Forward Sam Keita grabbed nine rebounds and guard Corey Samuels snagged eight to lead Sco.

“We still have some habits that we need to break down  — I think it’s going to be a long season for our bigs, as every game we go into there’s going to be another guy that can really play on the inside,” said Hopkins. “We made some good adjustments and after a reminder at halftime, we stepped up and made more of an effort on that part of the game.”

For a second-straight league game, Myerscough’s bench contributed heavily, this time with 46 points. It has 23 against the Pioneers.

Williams and Keita led the charge whilst six players played at least 15 minutes off the bench. Shaquille Toussaint added seven points in his team debut and Lewis McGlasson and David Walsh both provided a spark in key moments to extend runs.