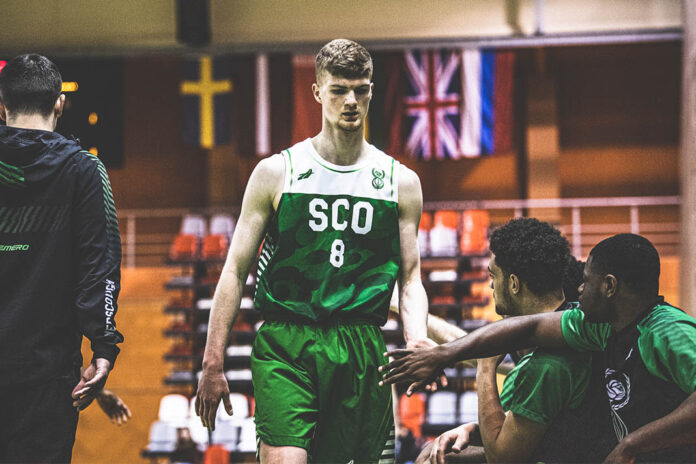 McGlasson spent his freshman year at Blinn College (JUCO/Texas) where he played in just three games before going down with an ankle injury and missed the remainder of the shortened 2020-21 season. He was one part of the Myerscough trio that had committed to Blinn last May, alongside teammates Sanmi Fajana and Sam Chigbo.

“The injury took a lot out of me,” said McGlasson, who graduated from Myerscough College at the end of the 2019-20 season. “I didn’t know how long it was going to take to heal at first and I’m still in the process of recovering, but I’m finally getting back to full training now. It’s now about strengthening the ankle and making sure I’m ready for the season ahead.

“I’ve never been injured for this amount of time before so I’ve learned that I can fight through adversity and to deal with tough times and just try and keep a smile on my face as much as possible even though it was hard at times.”

McGlasson enjoyed a successful three-year career with the Academy, winning seven junior and being part of teams that won three senior national championships. He was named Most Valuable Player of the 2018 Under-18 National Championship and ranked in the top 10 nationally as a junior prospect from the Class of 2020.

The 6-foot-4 and 83 kg native of Stirling, Scotland started 11 of 15 games during Myerscough’s run to the 2019-20 European Youth Basketball League regular season championship — the first-ever season-long title by a British basketball team at any level. He was also a key component in helping the Preston-based Academy claim a fourth EABL North Conference regular season championship and a place in the EABL Finals — cancelled by Basketball England due to the COVID-19 outbreak. He ranked fourth on the team in scoring at 11.6 points per game on 48.9 percent shooting.

McGlasson averaged 13.4 points in 16 games in NBL Division 2 in 2019-20. He reached double figures scoring 13 times, had three 20-point outings and had multiple 3-pointers made in 10 games. Myerscough had a 14-3 league record and 17-4 mark overall in the men’s league, where it made a historic run to the National Cup semifinals.

“Saint Francis stood out about me because everything about the place just fit in so well, especially with the timing,” said McGlasson. “Coming off the injury, I knew I wasn’t going back (to JUCO) and was looking for a new school anyway and Saint Francis is a four-year school and that’s what I’ve ultimately been working towards.

“The other thing about Saint Francis is that they have so many international players — so the coach knows how to deal with European players and I watched a lot of their games and the style they play is so perfect for me as a player, which is what I was looking for in a school.”

Saint Francis had six players on the 2020-21 roster that hailed from outside the United States, including natives of New Zealand, Spain, Australia, Israel and Taiwan, as well as had six seniors and nine underclassmen.

Saint Francis currently plays in the National Association of Intercollegiate Athletics (NAIA) and in the Chicagoland Collegiate Athletic Conference (CCAC), where they have competed since 1973.

The Fighting Saints are coached by Ryan Marks, who will be entering his ninth season. Marks guided his team to a 14-10 record during a year in which they lost eight games to postponements or cancellations due to the COVID-19 pandemic. He is a two-time CCAC Coach of the Year (2014-15 and 2015-16) and former winner of CollegeInsider.com’s Jack Bennett Award, which is presented to a non-NCAA Division I head coach who achieves success on the basketball court, while displaying great moral integrity off the court.

McGlasson has been predominately known for his shooting ability from 3-point range during his career and joins a team that hit 38 percent from beyond the arc last season and averaged 7.4 made threes on 19.5 attempts per game. Junior guard Joey Buggemi, meanwhile, led the team with 46 made 3-pointers.

“I’m looking to make an impact straight away in my first year and that’s my main goal,” said McGlasson. “I don’t really care what that is — it could be anything — but coming off an injury, I’m just looking to make that impact and show people what I can do.”