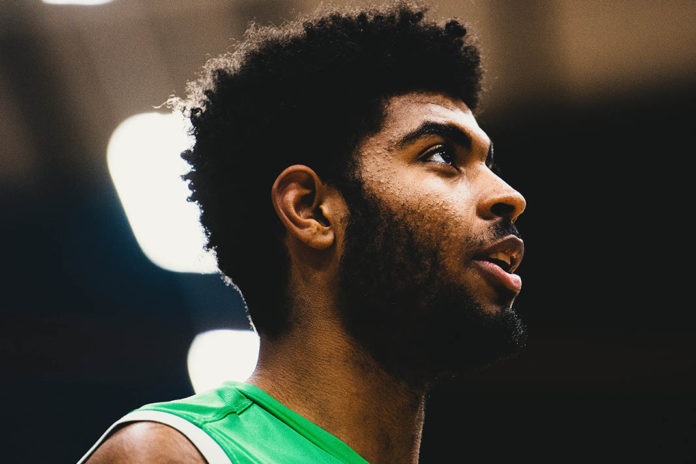 PRESTON – Myerscough forward Sanmi Fajana (Class of 2020) was named the EABL’s Player of the Week, the league announced on Wednesday.

Fajana hit a game-winning 3-point shot in the closing seconds to help Myerscough, which had already locked up a No. 1 seed in the playoffs, complete a 22-point comeback in an 83-80 road win over Derby.

The 6-foot-8 forward scored a season-high 22 points on 9-of-14 shooting to go with 13 rebounds against Derby, posting his second EABL double-double this year and adding four assists and three steals in the process.

“Being named [EABL Player of the Week] is quite an achievement, especially the fact the game was won in the closing stages, and to play a role in the comeback and help secure the unbeaten regular season is a great feeling,” said Fajana. “Coach Neal [Hopkins] puts his players in positions to be successful and we really showed our character as a team to fight back.”

The current No. 13 ranked DENG Camp prospect, who averaged 8.5 points and 6.6 rebounds in eight league games, had double-doubles in back-to-back starts (at SGS, vs. Derby) to close his regular season schedule out.

“I’m really happy for Sanmi,” said Myerscough head coach Neal Hopkins. “It has been a completely different season for him and it was fantastic to see him play the way he did — he has put a lot of work in and it’s great to see that work rewarded with a stand-out performance.”

The honour is the first of Fajana’s career and the third Player of the Week award for a Myerscough student-athlete this season after Amari Williams (Week 8) and Bradley Kaboza (Week 16).

No. 1-seed Myerscough (14-0 EABL North) faces an Elite 8 matchup against No. 4-seed Canterbury (9-7 EABL South) in the playoffs on Feb. 26, with tip-off at the Preston-based College’s High Performance Centre to be confirmed.